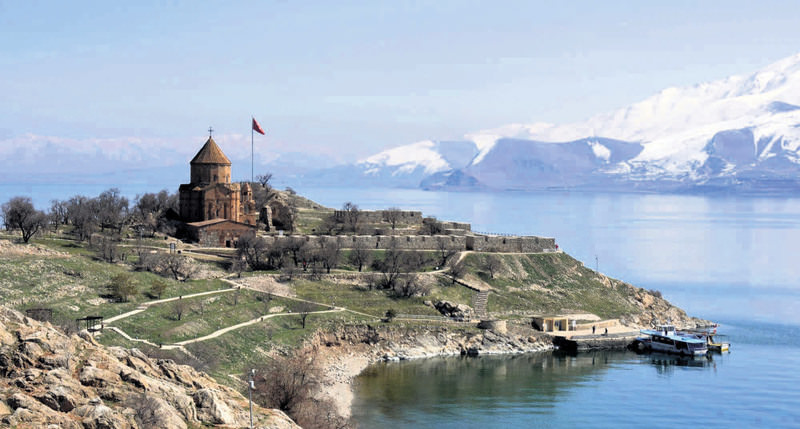 by Ihlas News Agency Apr 06, 2015 12:00 am
Akdamar Island in eastern Turkey's Lake Van is under threat of a boom in the rabbit population. A significant rise in the number of rabbits poses a danger to the eponymous church, the sole structure on the small island.

Turkish authorities have resorted to setting up traps to capture them alive to curb the population rise which is damaging both vegetation and the walls of the church.

Rabbits, dropped on the unpopulated island years ago, quickly propogated. A delegation of academics, environmental activists and animal activists, as well as local officials have examined the situation and prepared a report, citing that the boom is a risk for the island. The report also points out the need to diversify the local almond tree population and reparation of fences to prevent human access to local birds' breeding grounds to protect the environment on the island.

"We decided to decrease the number of rabbits and bring balance to the ecosystem. It will be through mechanical means, by setting up traps. It is difficult to tackle such a rise and we expect that our efforts will continue throughout summer," Associate Professor Lokman Aslan from Van's Yüzüncü Yıl University, who was a member of the delegation, said.

Akdamar is home to Church of the Holy Cross, a 10th century Armenian church, which was reopened after restoration in 2007. It hosts an annual mass every year with participation of the Armenian Orthodox community of Turkey and Orthodox Armenians from other countries.

The church is a popular destination for Turkish and foreign tourists especially in the summer. Local authorities recently announced that the work has begun to improve landscaping of the island and a new pier was constructed on the island.
Last Update: Apr 06, 2015 10:13 am
RELATED TOPICS