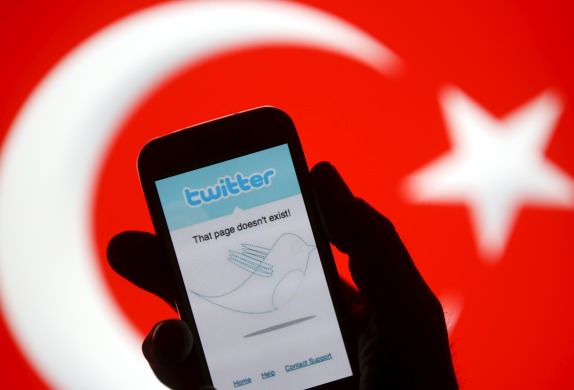 | Reuters Photo
by daily sabah Apr 06, 2015 12:00 am
The block on access to Twitter and YouTube was lifted on Monday evening in Turkey. Internet Service Providers Union (ESB) of Turkey made a statement on early Monday evening, saying that access to Twitter will soon be open. Reuters also reported on Monday that a Turkish official had said, Twitter has complied with Turkey's request to remove images of an Istanbul prosecutor held at gunpoint by far-left militants and the block of access to is about to be lifted.

"The ban will be lifted in a few minutes. Users across Turkey will be able to access Twitter within the hour," the official said on Monday, according to Reuters.

Access to Twitter and YouTube were blocked on Monday afternoon in the country over the image of a prosecutor who was killed by Revolutionary People's Liberation Party-Front (DHKP-C) terrorists in Istanbul last week. Facebook was excluded from the ban after it agreed to remove the photo and other related content. The ban on Twitter and YouTube will be reportedly lifted once they comply with the court order to remove the content.

The cause of the ban stems from a photo of Mehmet Selim Kiraz, the prosecutor who was taken hostage by two DHKP-C terrorists. The terrorist organization released the photo of the prosecutor with duct tape over his mouth and a gun pointed to his head against the backdrop of the terrorist organization's flag. The photo, widely circulated on social media, was published by several newspapers and media sites – much to the chagrin of government officials condemning them of running terrorist propaganda.

Quoting Turkish telecoms sources, Reuters reported that access was blocked following a court ruling based on complaints from individuals over the notorious photo.

Anadolu Agency reported that the ban stemmed from an Istanbul court's order dating back to April 3. The court had ordered websites publishing "videos, photos and audio" related to the incident to be blocked, but the Union of Service Providers had reportedly refused to block the sites since that date.

Twitter and YouTube users in the country circumvented the ban by connecting to the said websites via virtual proxy networks.

The photograph that caused the ban stirred a public outcry on the same social media websites banned by Turkey. Furthermore, coverage of the hostage crisis that ended with the killing of Kiraz by the terrorists, followed by the killing of the terrorists by security forces, drew the ire of Turkish leaders. Prime Minister Ahmet Davutoğlu had condemned media outlets for publishing the photo and ordered a ban on those news sites from covering the funeral of the prosecutor.

The Media Association, a nongovernmental organization of Turkish journalists, had also issued a statement denouncing the newspapers for contributing to DHKP-C propaganda by releasing the photo as well as journalists who refrained from labeling the gunmen as terrorists, branding them simply as activists instead.

Presidential spokesman İbrahim Kalın said the ban was rather specific on publication of the photo than a blanket ban on the websites. "This was out of necessity and as far as I know, the prosecutor's office requested that the photo not be published on any social media website," he stated.

Kalın criticized the release of the photograph by "some media groups which were supposed to act responsibly but published the photos almost as a propaganda of the terrorist organization and despite repeated warnings."

"No country has such freedom [of publishing such photos]. Many foreign media outlets abstained from using this photo because there is a criminal situation and a humanitarian situation. What would you possibly gain by publishing this photo? You should have considered how the children of this prosecutor would feel," Kalın said.

Kalın also said it was "unacceptable" to brand efforts against the publication of photographs as an attempt to curb freedoms.