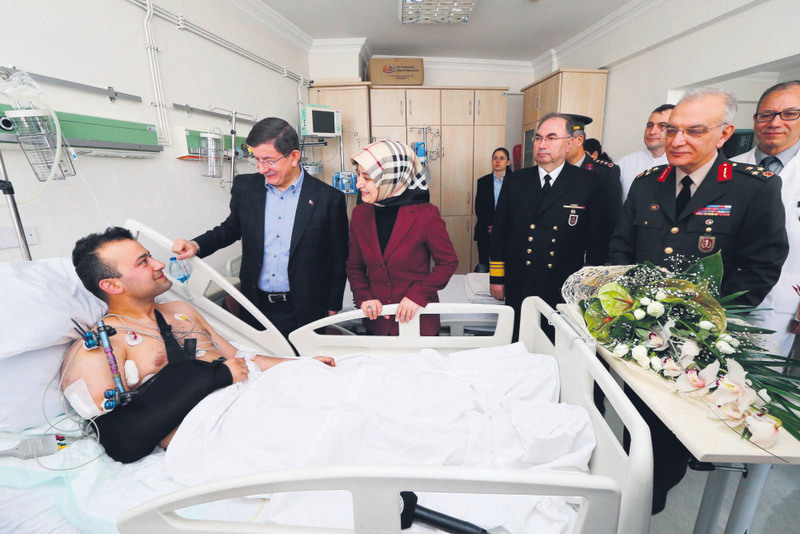 Prime Minister Davutou011flu visiting the four soldiers, who were injured in the clashes with PKK militants. The soldiers were later transfered to a military hospital in capital Ankara.
by daily sabah Apr 12, 2015 12:00 am

Members of the PKK on Saturday attacked a group of soldiers providing security at a tree-planting ceremony in the northeastern province of Ağrı only days after one of the most bellicose leaders of the terrorist group, Cemil Bayık, claimed he supported the government-initiated reconciliation process.

The initial PKK attack in the village of Yukarı Tütek in the Diyadin district of the province caused the military command to mobilize local Special Forces and counterattack PKK locations. The office of the chief of general staff released a statement later in the day saying that the 12-hour confrontation had left four soldiers wounded and five terrorists dead. The statement also said that one wounded PKK member was detained.

Speaking to German public television channels WDR and NDR at the PKK leadership's headquarters in the Qandil Mountains in northern Iraq, Bayık, a senior figure of the outlawed organization in Turkey, said the PKK is going through a transformation. "We are out with war. Neither we nor the state can achieve their goals through fighting."

The PKK attack coming only days after Bayık's statement is seen as proof of the insincerity of the hawkish wing of the terrorist group. Imprisoned PKK leader Abdullah Öcalan has called on the PKK to hold a convention to discuss disarmament and allowing politics to replace bloodshed.

The government's reconciliation process aims to expand the rights and freedoms of Turkey's Kurdish citizens and address their cultural and economic grievances, which have been long-ignored by the Turkish state.

According to statements, the clash on Saturday began when more than 25 PKK militants attacked soldiers who were guarding a ceremony held by the local pro-Kurdish Peoples' Democratic Party (HDP). Local armored forces and several helicopters were sent to the region. Four soldiers wounded in the clash were sent to a military hospital in Ankara for treatment and Prime Minister Ahmet Davutoğlu paid them a visit.

The attack was the topic of discussion at an analysis meeting at the Prime Ministry, which reached the conclusion that the PKK was trying to pressure the electorate in the east and the southeast before the June 7 general elections. Analysts at the Prime Ministry agreed the terrorist group is also determined to sabotage the reconciliation process.

The government's efforts to provide security before the elections are directed at 20 high-priority provinces, with 50,000 police officers undergoing special ballot box security training. A total of 1,065 special police force officers are deployed in these cities along with 10 gendarmerie battalions. A special coordination structure focused on domestic and border security is built---is being built under the authority of the Interior Ministry.

Prime Minister Ahmet Davutoğlu said Sunday that terrorists were getting the response they deserved, adding: "We will make sure our people vote with their free will and without any pressure.

Davutoğlu, speaking at the ruling Justice and Development Party (AK Party) Istanbul Youth branch meeting on Sunday, said the attack by the terrorist group DHKP-C on the Istanbul courthouse that killed Prosecutor Savcı Mehmet Selim Kiraz on March 31 and Saturday's attack on troops was no coincidence, adding that both tried to harm Turkey's democracy and derail the coming June 7 elections. In his address to the party youth, he called on them to protect Turkey's future against terrorist traps. He also accused Peoples' Democratic Party (HDP) leader Selahattin Demirtaş of being part of the trap for failing to condemn the PKK and criticizing the military instead. He said the Turkish military was the military of a democratic state and would follow the orders coming from the political leadership.

Deputy Prime Minister Yalçın Akdoğan also condemned the PKK attack, and said, "those who played with fire will lose in the end."

He said the PKK was trying to force local voters to vote according to the terrorist group's priorities and that the government was determined to prevent that.

The pro-Kurdish HDP, which is expected to receive less than the 10 percent election threshold needed to enter Parliament, sent a delegation to the region to assess the matter and added that they would release a statement afterward.

HDP Co-Chair Selahattin Demirtaş described the attack as unfortunate. "We are yet to receive detailed information on the attack. It is upsetting and troubling. It needs to be investigated. If we are all supporting the reconciliation process it is to ensure guns fall silent, no one is killed or wounded," he said.
Last Update: Apr 13, 2015 10:12 am
RELATED TOPICS