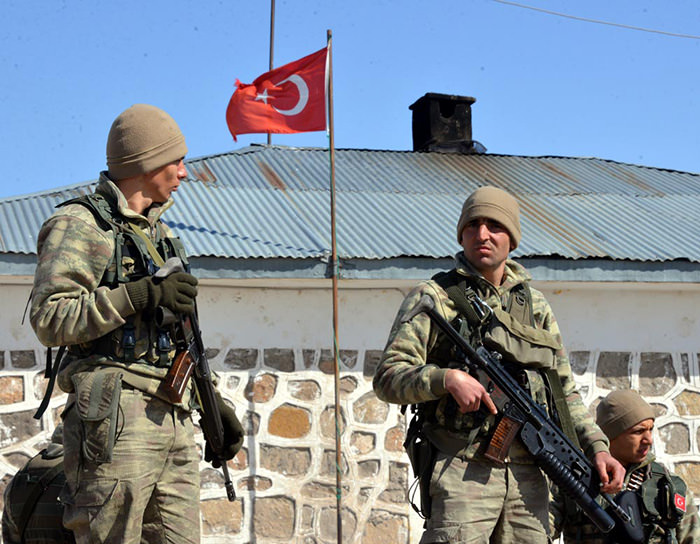 An attack on Turkish troops in the eastern province of Ağrı's Diyadin district on Saturday by members of the PKK terrorist organization sparked outrage, but its aftermath offered a solace for the future of the country's reconciliation process to end terrorism.

In a rare statement, the Turkish Armed Forces – the main actor of a decades-long battle to end the terrorism plaguing the southeastern and eastern parts of the country – expressed its gratitude to locals who helped transfer wounded troops to hospitals.

"Our citizens' assistance to four military personnel injured in the clash with terrorists and aiding them in the airlift is praiseworthy, and exemplary of our citizens' love of the army and its commitment. It is a beautiful example of our nation's unity. We thank our citizens," the statement said.

Troops were providing security at a local festival in a village in Diyadin on Saturday when terrorists from the PKK opened fire. The five terrorists who opened fire on the troops were killed in the ensuing clash, while the army did not sustain any casualties, only injuries.

On the other hand, some officials from the Peoples' Democratic Party (HDP), a pro-PKK opposition party, claimed a group of locals acted as voluntary human shields between the soldiers and the militants. The army denounced the definition of locals as human shields. Speaking to Anadolu Agency, army spokesman Ertuğrulgazi Özkürkçü said they did not accept this definition, and said troops were not in the area to conduct a military operation. He said troops were simply dispatched to provide security at the local festival, a common practice, when they came under fire.

The Turkish Armed Forces has suffered from a tarnished image in the region due to its brutal crackdown on the terrorist organization, especially in the 1990s. Its officers faced charges of conducting extra-judicial killings and in some cases, killing civilians to intimidate the predominantly Kurdish population in the southeast. Therefore, the army was often treated with hostility, especially in areas where the PKK draws support.

The attack came at a time of increasing momentum in the country's reconciliation process, a series of steps taken by the government to end the lengthy campaign of terror by the PKK. Prime Minister Ahmet Davutoğlu and President Recep Tayyip Erdoğan condemned the attack, while Davutoğlu stressed that they would ensure the attack would not raise security concerns, especially ahead of June's general elections. Erdoğan has stated that the attack sought to harm the atmosphere of peace and undermine the reconciliation process.

The PKK's jailed leader Abdullah Öcalan has called on the militants to lay down arms in a written statement last month after a landmark "withdrawal" by the terrorist organization from Turkish territories two years ago.

Still, the terrorist organization, which has fought for Kurdish self-rule in southeastern Turkey since it launched its first major attacks in the 1980s, apparently suffers from infighting as the attack in Diyadin indicated. The Diyadin attack came barely a week after Cemil Bayık, a senior figure in the PKK, said in an interview that the group was going through a transformation. "We are finished with war. Neither we nor the state can achieve our goals through fighting," he said. Experts say the PKK's "hawks" look to keep its reign of terror intact despite steps by Öcalan and the government.
Last Update: Apr 13, 2015 6:59 pm
RELATED TOPICS