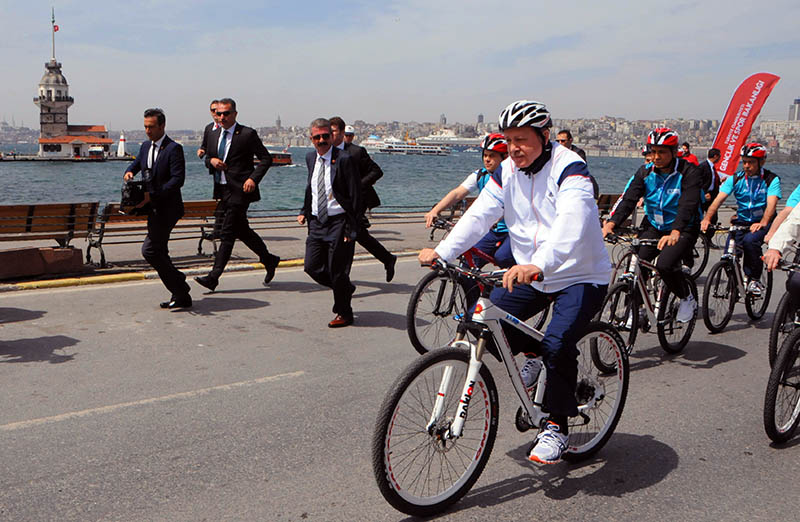 by Daily Sabah with AA Apr 18, 2015 12:00 am
Attending an event to promote the 51st Presidential Cycling Tour of Turkey (TUR), President Recep Tayyip Erdoğan cycled from the starting point near Maiden's Tower to the Harem Bus Station riding a custom-made bicycle. Emphasizing that cycling is very important for public health, the president said, "I hope that we will rapidly improve the infrastructure for bicycle riders and enhance the love for cycling." TUR will start in Antalya on April 26 and end in Istanbul on May 3.

Conveying that there is "great international interest in the race," President Erdoğan said that the race will end in Istanbul on May 3. President Erdoğan said, " Unlike many other countries in the world, especially Western countries, we could not make people love cycling. We cannot say that we have good infrastructure for bicycle riders. However, some of our provinces, particularly Konya, have taken good steps towards establishing such infrastructure in recent times. I hope that we will rapidly improve the infrastructure for bicycle riders in other provinces such as Istanbul, Ankara, Izmir, Antalya, and enhance the love for cycling. If bicycle producers make the prices affordable, then its consumption would be much more different. Cycling is very important for our health. I congratulate the Ministry of Youth and Sports, the Ministry of Health and the Ministry of National Education and our government for this. I wish all international racers success." Afterward, President Erdoğan was presented a medal by Minister of Youth and Sports Akif Çağatay Kılıç.

Mark Cavendish and Tom Boonen are taking part in the 2015 edition, meaning the tradition is secure for yet another year. The two great Etixx - Quick-Step riders will join a sprint field that is also expected to include Germany's Andre Greipel, the Italians Sacha Modolo, Sonny Colbrelli and Davide Appollonio, the Belgian Jelle Wallays, and the Colombian former world points champion Edwin Avila, to name just a few.

With six wins already this season (a stage in Tour de San Luis, two stage wins and the overall classification at the Dubai Tour, and wins in Clásica de Almeria and Kuurne-Bruxelles-Kuurne), Mark Cavendish's route to the Tour de France will continue along the same itinerary as last year, when he rode his first TUR to great success, winning stages 1 (Alanya-Alanya), 2 (Alanya - Kemer), 4 (Fethiye - Marmaris) and 8 (Istanbul - Istanbul), as well as the Green Jersey in the points classification. He will then participate in the Amgen Tour of California, the Tour de Suisse, and the British National Road Championships before starting the Tour de France. Tom Boonen, who has been recovering from surgery on a shoulder injury sustained on March 9 in a fall during stage 1 of Paris-Nice, will return to racing at the Presidential Tour of Turkey, where he will work on condition in view of the Giro d'Italia.