Turkey's coastguard rescues 30 Syrians from a boat heading towards Greece 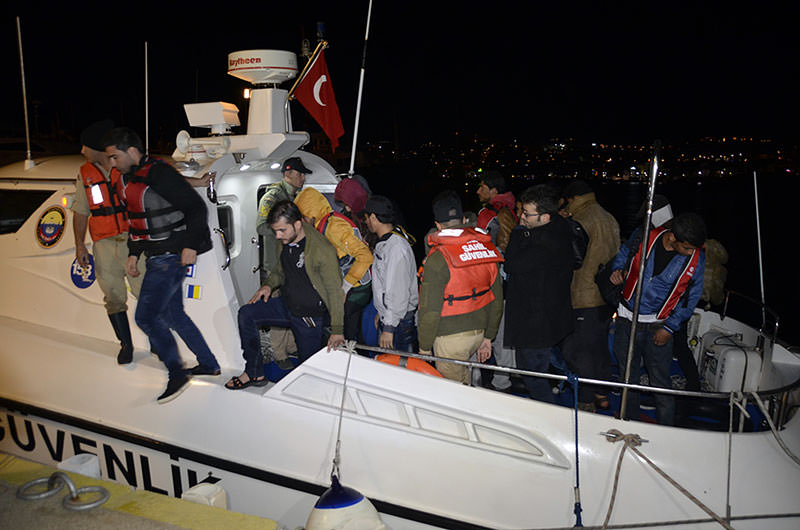 | AA Photo
by French Press Agency - AFP Apr 21, 2015 12:00 am
Turkey's coastguard rescued 30 Syrians from a boat heading towards Greece after their vessel began to take on water in the Aegean Sea, state media said on Tuesday.

The rescue operation came amid a surge in the numbers of migrants seeking to reach Europe, following the Mediterranean's worst migrant disaster in which as many as 800 people drowned off the coast of Libya.

The migrants had been trying to reach the Greek island of Kos from the Turkish resort of Bodrum but their boat started to take on water during a storm, the official Anatolia news agency said.

The coastguard was mobilised following a tip-off and intercepted the boat off Bodrum late on Monday.

The officials rescued all the migrants, including a child, from the sinking boat at the last minute, Anatolia said.

Some migrants were forced by their suspected smugglers to jump into the water. Police were trying to identify the captain of the boat.

The agency said that some of the migrants had been detained a few times before as they tried to cross into Europe illegally.

A fishing vessel crammed with migrants capsized off Libya at the weekend with the loss of 800 lives, a few days after hundreds died in another incident.

Turkey, which is already sheltering 1.8 million refugees from the Syrian civil war, has become a key transit point for people seeking a better life in Europe.

Many pay people smugglers thousands of dollars to travel towards EU states in small boats, but the journey is fraught with danger.