A special day for children of Turkey and the world 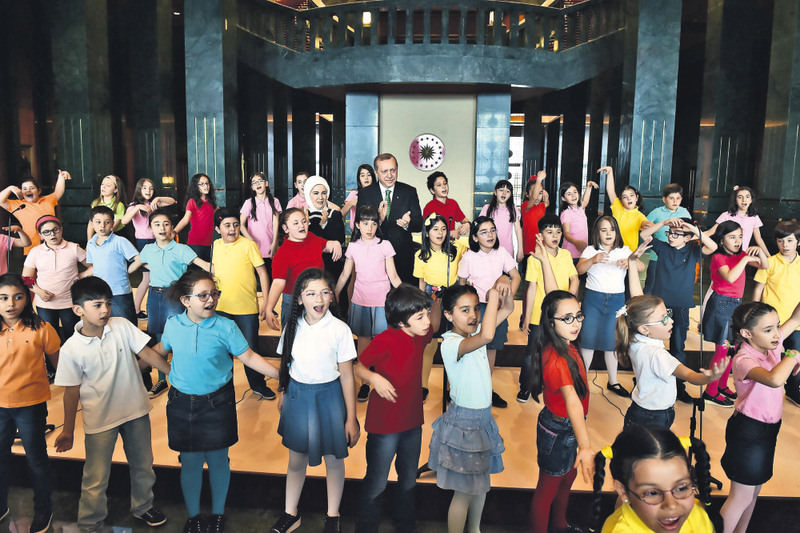 President Erdou011fan accompanying children singing at a special event hosted by the president on Tuesday ahead of Children's Day.
by Yusuf Ziya Durmuş Apr 22, 2015 12:00 am

Turkey is set to observe Children's Day today, a day Turkey boasts as the only special day entirely dedicated to children. Children from around the world will come together in state-sponsored events to mark the day

It is formally known as National Sovereignty and Children's Day, but April 23 is the date most associated with young ones in Turkey. The day, dedicated to children by Mustafa Kemal Atatürk, the founder and first president of the Republic of Turkey, will see festivities focused on children.

Turkey boasts that it is the only day in the world entirely dedicated to children, and hosts children from around the world for a large-scale festival organized by state-run broadcaster Turkish Radio and Television (TRT).

Hundreds of children from 35 countries recently arrived in Turkey, and during their stay, they bonded with Turkish children while they stayed with Turkish families. They also prepared for folk dances, concerts and other shows they will perform today during the TRT Children's Festival, a culmination of celebrations for the day.

All across the country, variety shows, theater plays and other activities exclusively for children are being held throughout the day.

April 23 has patriotic undertones as it is the date the Turkish Grand National Assembly or the Parliament was first convened in 1920 in the capital Ankara by Atatürk. The Parliament was the first step towards the foundation of Republic three years later, and for a fierce struggle of independence by the Turkish nation defying the occupying forces of the British, French and Italians after the collapse of the Ottoman Empire. The date, originally marked as a holiday on the occasion of National Sovereignty Day, has also been celebrated as Children's Day since 1935.

On the sovereignty side of the day, formal ceremonies are held in every city by local administrators laying a wreath on statues of Atatürk. Streets, exteriors of buildings and balconies of apartment buildings are adorned with flags, large and small. Still, children are at the forefront of National Sovereignty Day activities as reciters of patriotic poems at ceremonies. Anıtkabir, the mausoleum of Atatürk in Ankara, is the central point of events where Turkish leaders visit on the occasion.

April 23 celebrations also have a grand tradition that gives some children the opportunity to replace adults. The president, prime minister, members of the Parliament, governors, police chiefs and many other high-ranking officials leave their seats to children for one day in symbolic observation of the day.

Conflicts in their countries overshadow an otherwise happy day for children who arrived from Syria, the Palestinian territories and African countries among others for the TRT's children's festival. Receiving children on Tuesday, President Recep Tayyip Erdoğan underscored the challenges children faced, particularly those in conflict zones. "Never stop dreaming about the bluest seas, even if you are in the middle of a desert. We want to see hope in your eyes, not fear. Unfortunately, we see the tears of children with every passing second," he told children before quoting a poem by Turkish poet Nazım Hikmet: "Gentlemen, do not kill the children."
Last Update: Apr 22, 2015 9:29 pm
RELATED TOPICS