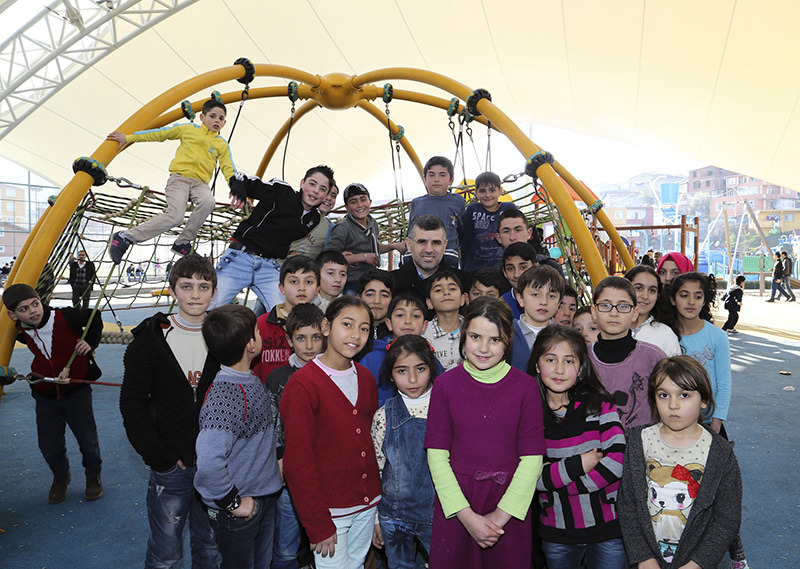 | IHA Photo
by daily sabah Apr 22, 2015 12:00 am
The percentage of children in the total population fell 0.3 percent last year compared to 2013, according to official figures released on Wednesday that showed southeastern Turkey has the largest number of children.

The Turkish Statistical Agency (TÜİK) released "Statistics on Children" on Wednesday, one day ahead of Children's Day, a festival designated as a holiday for children in Turkey. The figures revealed that in a population of 77.6 million people in 2014, there were 22.8 million children, or 29.4 percent. It indicated a slight decrease compared to 2013 when it was 29.7 percent. TÜİK figures also show the southeast of Turkey again dominates the list of regions with the largest number of children.

The percentage of children in the general population is projected to fall to 25.7 percent by 2023, 19.1 percent by 2050 and 17.6 percent by 2075. The data echoes long-standing concerns of President Recep Tayyip Erdoğan, who frequently repeats his call to Turkish families to have at least three children in order to prevent Turkey's population from aging.

TÜİK compiled data on various issues from health to Internet use among children. More than half of the children between the ages of six and 15 use social media websites, while boys are more active on social networks compared to girls.

As for the health of children, 8.3 percent of child population were found to be obese and obesity is more prevalent among boys. Turkish children increasingly avoid physical activity, according to reports on obesity. Experts attribute high obesity figures to a number of factors, ranging from parents who do not exercise daily and set a bad example for children, to growing interest in unhealthy fast-food products. A sedentary lifestyle is another factor. According to surveys, grade school students spent less than two hours outdoors on the weekends and even less time during the week. Increasing obesity rates are also attributed to more time spent watching television and the pursuit of other indoor activities.
Last Update: Apr 23, 2015 12:21 pm
RELATED TOPICS