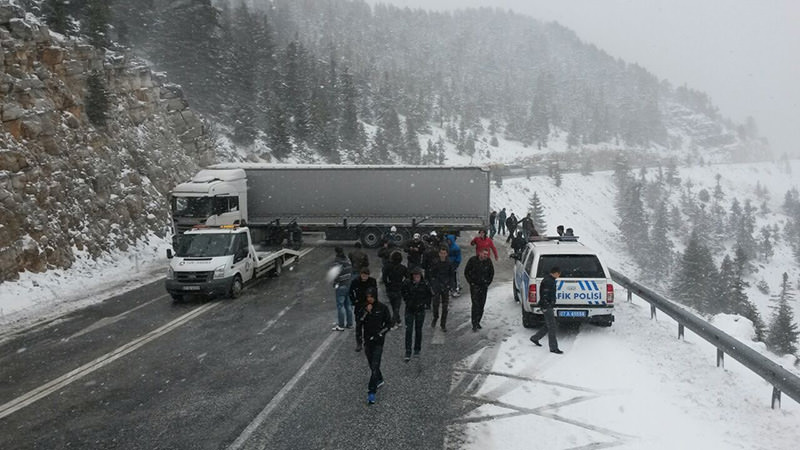 | AA Photo
by daily sabah Apr 23, 2015 12:00 am
Unexpected snowfall late on Wednesday led to the closure of a road connecting Antalya, a southern Turkish summer resort city known for its warm climate, in the central province of Konya.

An elevated section of the road between Antalya's Akseki district and Konya's Seydişehir district was hit with heavy snowfall and ice. Visibility was almost nonexistent, leaving motorists stranded, and drivers desperately waited in their cars as they could not move for hours. Tow trucks were dispatched to the area to remove cars blocking the road while snowplows worked tirelessly to clear the road. Traffic police helped drivers find accommodation at hotels in the area where the snow depth reached 10 centimeters.

Elsewhere in Turkey, snowfall gripped the easternmost province of Kars. The province is known for hosting a lengthy cold spell during winter, but snowfall in April is rare. Weather forecasters warn that eastern Turkey will experience a period of snowfall until the weekend, with temperatures eight degrees Celsius below what is generally expected in the spring.
Last Update: Apr 23, 2015 4:41 pm
RELATED TOPICS