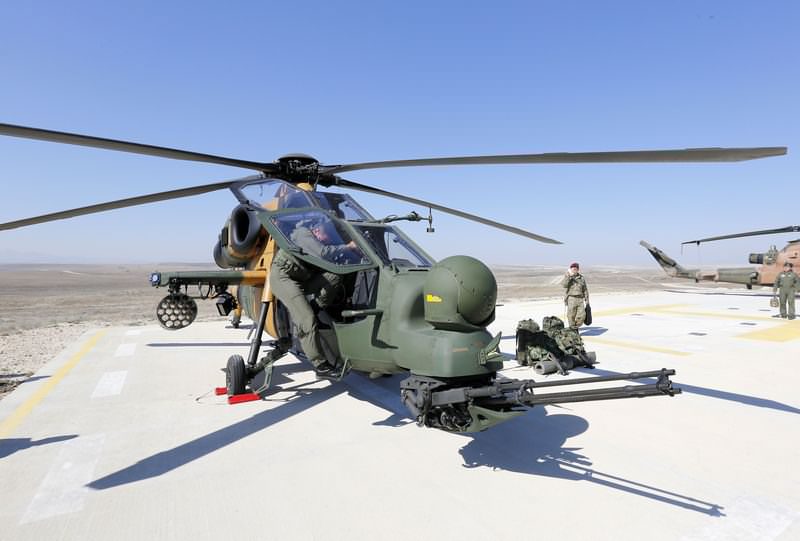 | AA Photo
by Anadolu Agency May 04, 2015 12:00 am
Turkey has deployed the first locally-made attack helicopters to the country's southeast, the military announced Monday.

Two T129 ATAK helicopters have been sent to Siirt province to back up operations against the outlawed PKK.

The two-crew aircraft, which can cruise at 269 kilometers per hour (167 miles per hour) and carry an arsenal of Hellfire missiles and guided rockets, have been assigned to the 3rd Commando Brigade.

In a statement, the Turkish General Staff said the helicopters arrived in Siirt on April 25. "The helicopters will serve also in Şırnak, Hakkari and Van provinces, day and night, as of May 2015," the statement added.

Turkey's defense industry is becoming increasingly self-sufficient, with the country producing its own naval vessels and battle tank.

The attack and reconnaissance helicopters, which are based on the AgustaWestland A129CBT, were developed by Turkish Aerospace Industries (TAI) and AgustaWestland. The first aircraft TAI-manufactured aircraft was delivered to the Turkish land forces last year, according to TAI's website.

The PKK has fought an insurgency against the Turkish state since 1984, resulting in the loss of more than 44,000 lives. The group is listed as a terrorist organization by Turkey, the U.S. and the EU. The government launched a reconciliation process in early 2013 to end the conflict.