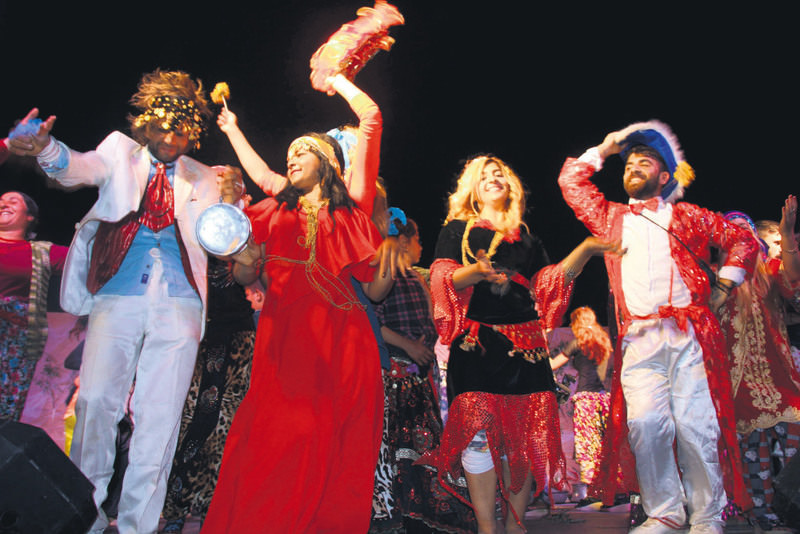 People in Edirne celebrated Kakava, the spring festival, by dancing throughout the night and tying ribbons on wish trees in the morning.
by Daily Sabah May 06, 2015 12:00 am

Turkey marked Hıdırellez, a traditional spring festival, on Tuesday and yesterday in events where people made wishes and danced. Meanwhile, Turkey's Roma population gathered in the city of Edirne for Kakava, a large-scale celebration bringing together people from all over the country

Revelers marked Hıdırellez or Ederlezi - the festival that encompasses the Turkic world and Balkans, and is especially popular among the Romanis - with festivities on Tuesday and Wednesday.

Colorful events to mark the arrival of spring saw bonfires illuminating the night with people dancing to folk music on Tuesday.

Edirne, home to a large Roma community, experienced the most crowded celebrations with people from all over the country as well as foreign tourists descending into the city for Kakava, a gathering of the community, for Hıdrellez. After setting a bonfire in Sarayiçi, a historical district of Edirne, the crowd spent the night dancing. As the sun rose yesterday, streams of revelers flocked to the Tunca River where they washed their face in the river "for prosperity and health." They then proceeded to leave candles on the river after making wishes and tying ribbons to a wish tree. Hundreds also washed their possessions, from clothes to shoes, in the river in the hope that the water from the river will bring good fortune to them. Kakava is included on UNESCO's Tentative World Heritage List, and some 4,000 people attended the events this year.

The word Hıdırellez is believed to have been derived from Hızır and İlyas, two pre-Islamic prophets whose earthly meeting in May, specifically in the first week of May, led to a belief that the people's wishes would be fulfilled on that date. Although it is commonly celebrated everywhere in Turkey, its mood is more festive among the Roma community. Apart from Edirne, Istanbul also hosted a major celebration by the Romanis in the historic Ahırkapı district, which was marked with a parade of community members in extravagant and colorful costumes.
Last Update: May 06, 2015 9:37 pm
RELATED TOPICS