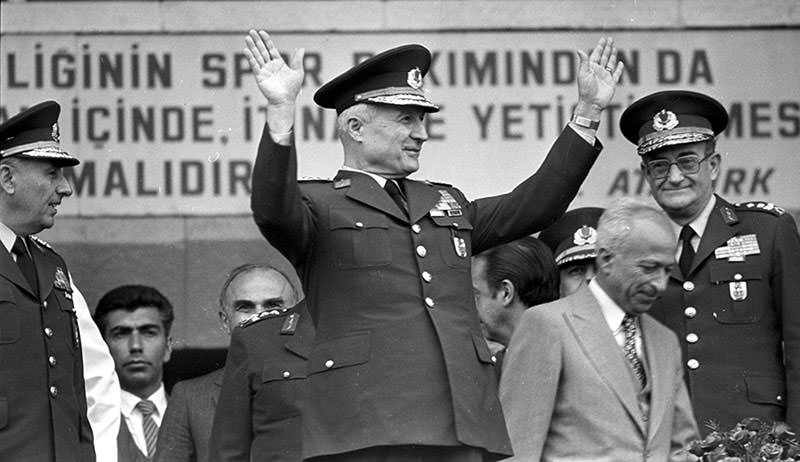 | AA Photo
by Daily Sabah May 11, 2015 12:00 am
A simple ceremony will be held at the Office of the Chief of Staff at 11:00 a.m. on Tuesday for the leader of the September 12, 1980 military coup, Kenan Evren, who died over the weekend at the age of 98. Later a funeral prayer will be held at the Ahmet Akseki Mosque in Ankara for Evren, who served as the country's president after a referendum held in 1982, before being buried at the state cemetery.

The ruling Justice and Development (AK Party)and the main opposition Republican People's Party (CHP) announced that they will not send a representative to the funeral. None of the political parties are expected to be present at the funeral ceremony.

In a statement released, the Office of the Chief of Staff described Evren as a retired general. Evren, who was tried and found guilty for leading a coup had been demoted to a private but the decision was suspended pending an appeal.

The statement made no mention of the 1980 coup, which is infamous for the widespread torture and restrictions placed on the country, or what he did between 1980 when he was the chief of staff until he became the president in 1982.

Deputy Prime Minister Bülent Arınç, who faced jail and bans on his political career in the post 1980-coup era, when asked about the death of the coup leader, said he had nothing good to say about the individual in light of what he had done.

"Kenan Evren is officially a former president. A state funeral is possible. I will not attend it," he said, adding that he knew many who supported the coup at the time, accusing them of blatant hypocrisy. "Bad things shouldn't be said after a person dies. May he rest in peace. That's the only thing I can say for a coup leader."
Related: Mastermind of 1980 Turkish coup Kenan Evren dies, legacy lingers