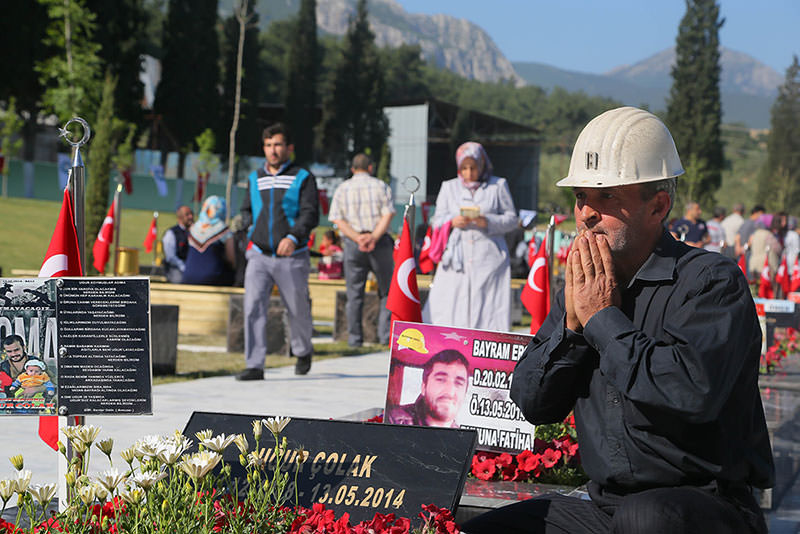 | AA Photo
by Anadolu Agency May 13, 2015 12:00 am
Today marks one year since Turkey's deadliest mining disaster which claimed the lives of 301 people in the western town of Soma.

Claimed to be the worst in the world in 40 years, and the 19th worst in world history, the disaster shocked not only Turkey but also the international community.

While Turkey declared three days of mourning to show unity and sympathy with the families of the deceased miners, world leaders from dozens of countries showed an outpouring of sympathy by extending condolences and offering assistance.

The mine, operated by Soma Komur Mining Company, had previously been considered one of the safest in the country, but everything started with an explosion, causing a fire about 2,000 meters from the entrance. The fire then caused the mine to fill with toxic gas.

According to an official autopsy report released last November, most of the deaths were due to a form of poisoning where red blood cells came into contact with carbon monoxide gas.

This report concluded that toxic gas was produced by a spontaneous fire which broke out in coal dumped around a transformer.

Carbon monoxide produced by this fire met fresh air from an inlet, fuelling a greater blaze.

This spread to the mine's third and fourth corridors causing bands, timber supports, pipes and electric cables to catch fire.

Water and other attempts to extinguish the blaze produced more deadly poisonous and suffocating gas, the report also claimed.

However, given the large size of the mine, the fire which broke out underground was not solely responsible for the 301 deaths. Poison gas and suffocation produced by the blaze was the main cause of death.

Tevfik Cücü, a miner who survived the tragedy, recalled the harrowing scene when he spoke to Anadolu Agency last year.

"Smoke was everywhere. We put on our masks. People couldn't see each other as they walked. The smoke was restricting us.

"We started out with 25-30 people; when we reached 'the breath' [mine entrance] there was only an unconscious friend beside me..," he said.

There were over 780 workers underground at the time of the disaster; it occurred at the same time as the miners' shift change.