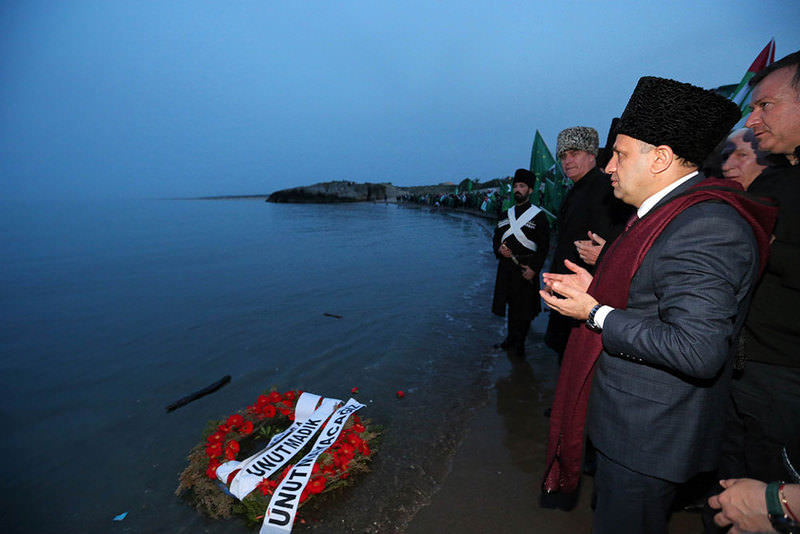 by Sinan Öztürk May 17, 2015 12:00 am
Turkey's Circassian community marked Sunday the 151st anniversary of the expulsion and ethnic cleansing imposed by the Russian Empire in 1864 that led to the death of around half a million Circassians, while radically changing the demographics of the northern Caucasus region.

Hundreds gathered in the Kandıra district of northern Kocaeli province on Sunday, one of the arrival points of fleeing Circassians, to commemorate their ancestors.

The group, including Science, Industry and Technology Minister Fikri Işık, Kocaeli Mayor İbrahim Karaosmanoğlu and representatives of Caucasian and Circassian associations, laid wreaths and cloves in the sea.

"Circassians suffered great pains but never gave up their honor. The grandchildren of Sheikh Shamil have lived with honor," Minister Işık said.

Meanwhile in the Reyhanlı district of the southern province of Hatay, next to the border with Syria, Turkish-Circassians marked the exile with Syrian-Circassians who fled the civil war.

Reyhanlı Circassian Association head Uğur Pihava said that the suffering of the Circassian community continues to this day.

The Federation of Circassian Associations will stage a protest in front of the Russian Consulate in Istanbul on May 21, marked by the community as Circassian Genocide and Exile Day.

Tuguj Halis Din, a board member of the federation, said that almost half of the entire Circassian population perished, while most of the remaining people had to start over in places where they were resettled.

As the Ottoman Empire was declining at the end of the 18th century, Russia extended its borders into the Caucasus, meeting stiff resistance from the Muslim peoples of the northern Caucasus, namely the Circassians (also known as Adyghe people), Abkhazians, Chechens and others.

After a century of war and uprisings, embodied in legendary leader Sheikh Shamil, Russia finally subdued the region, massacring the local population and forcing them into exile in the Ottoman Empire.

Most Circassians were herded onto ships to be transferred from the northeastern shores of the Black Sea to Anatolia. Thousands perished due to hunger and thirst, while many died when their ships sank.

The issue was a hotly debated topic prior to and during the Sochi 2014 Winter Olympics that coincided with the 150th year since the expulsion. The area near the Russian Black Sea resort town was one of the last strongholds of Circassian insurgent groups.

Turkey has a well-integrated Turkish-Circassian community living within its borders with a population ranging from 1.5 to 3 million, mainly concentrated in the northern provinces of Samsun, Amasya, Tokat and the northwestern provinces of Sakarya, Kocaeli, Balıkesir and Kütahya.

This number is only around 750,000 in native Circassian lands currently located in the Russian Federation.

The former Ottoman provinces of Jordan and Syria have a 180,000 and 120,000 strong Circassian community, respectively, within their borders, while the latter has suffered from civil war in the last four years.