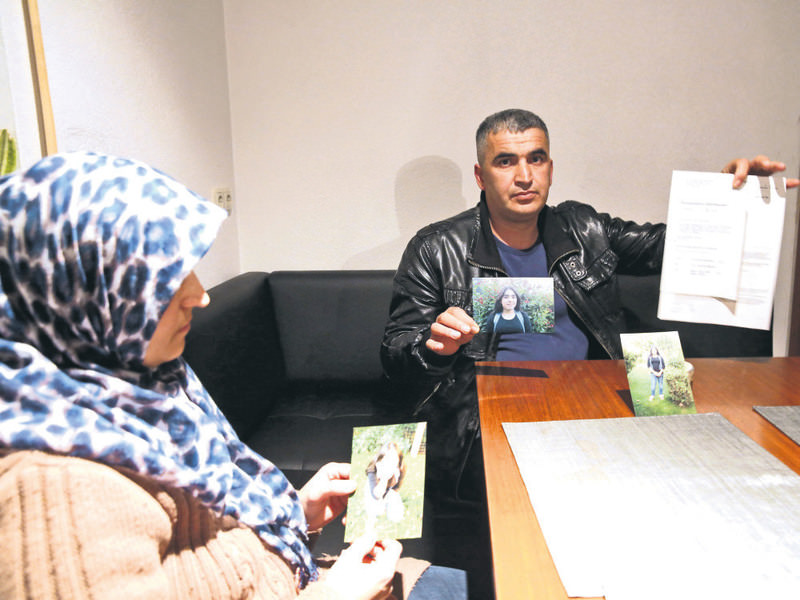 The Yu0131lmazou011flu family from the German town of Lieblos said their 12-year-old daughter Ravza was taken away from them by child protection office officials without providing any explanation.
by Burcu Çalık May 17, 2015 12:00 am

Turkey is planning to build children's shelters in Germany for Turkish and Muslim children taken away from their families, while launching an awareness campaign to protect families

Turkey will build children's shelters in Germany to house children taken by social services. The Family and Social Policies Ministry is in the process of building the shelters to ensure children taken away from Turkish families for various reasons are raised learning Turkish culture.

The ministry wants such children to be adopted by Turkish families and if that's not possible, to house them in the shelters. The shelters, the first one planned to be built in Düsseldorf, will prevent the assimilation of Turkish children overseas.

The ministry initially plans to build a total of 22 family and social policies centers. According to reports, the preliminary groundwork for the shelters is complete, which will be accompanied by anti-violence awareness campaigns among Turkish families. After the centers, the shelter project, where Turkish and Muslim children will be housed, will be launched. Shelters will be similar to those in Turkey and will at first house children taken away from their families due to physical abuse.

The primary objective will be to ensure Turkish children are looked after by Turkish families. However, ministry officials said it was very hard to find foster families, with the shelters serving as a secondary option to preserve Turkish culture.

The ministry's awareness campaign among the Turkish community will focus on how to treat their children, noting that in German culture, shouting at one's child is seen as a crime. Officials said Turkish families there found it hard to adopt German rules in child rearing and some lost their children just for shouting at them. Centers will brief families on the local roles and laws and how easy it is to lose one's child in Germany.

According to figures released by the ministry, on average 40,000 children are taken away from their families in Germany, 4,000 of whom are Turkish or Muslim.

Several reports in recent years about Turkish children taken away from their parents and given away to German families created uproar in Turkey. The Jugendamt, Germany's child welfare agency, is accused by some Turkish families for taking away their children without valid reasons.

About 5,000 Turkish children have been removed from their biological parents across Europe over the years and placed in German foster homes, much to the chagrin of families who claim their children are then raised as Christians. President Recep Tayyip Erdoğan has severely criticized the practice.

The government mobilized diplomatic efforts last year after the story of 9-year-old Yunus made headlines in 2013. The Turkish boy was adopted by a lesbian couple in the Netherlands. He was removed from his biological parents after he was injured when his Turkish mother accidentally dropped him on the floor when the boy was six months old. Dutch social services claimed the mother did not properly care for the child.

Activists from the Umut Yıldızı (Star of Hope) Association regularly campaign against Jugendamt's practices. Kamil Altay, director of Umut Yıldızı, said thousands of children were removed from their families every year and "raised in a lifestyle foreign to their own values."

Under a law implemented in 2012, putting children up for adoption was facilitated by making the slightest problem, such as a brawl at school or complaint about a family by a therapist the child was made to visit, a reason enough to remove them from their biological parents, according to Altay. Altay said 600,000 children were placed under protective custody since 1995 and they have no concrete figure about how many of them are Turkish children. "They are recorded as German nationals even if they are from Turkish families with no mention of their ethnic background," he said.
Last Update: May 17, 2015 8:49 pm
RELATED TOPICS