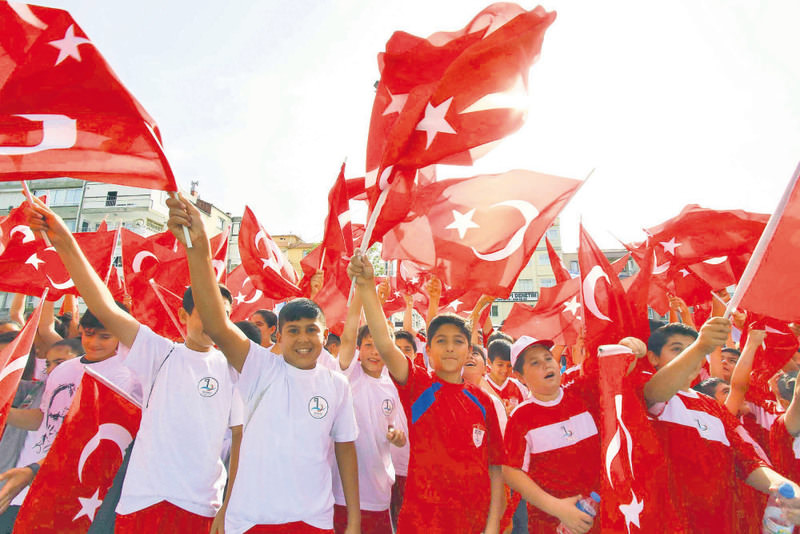 by Yusuf Ziya Durmuş May 18, 2015 12:00 am
Turkey on Tuesday will mark the Commemoration of Atatürk, Youth and Sports Day that, like another festival in April, combines patriotic sentiment with celebration of the youth.

The day originally marks the 96th anniversary of the arrival of Mustafa Kemal Atatürk, founder of modern Turkey, in the Black Sea city of Samsun. Atatürk, then a top commander in the Ottoman Army, had secretly traveled there from Istanbul, which was occupied by the Allies following World War I. His arrival is commonly called the "first step" in Turkey's War of Independence that eventually led to the foundation of Republic of Turkey. With the assistance of top commanders and opinion leaders, Atatürk managed to mobilize forces and the public long daunted by the war.

However, this national day has also been celebrated as Youth and Sports Day since 1938 because Atatürk decided to dedicate the day to the youth, like he dedicated National Sovereignty Day on April 23 to children.

On the patriotic side, the day will be marked with a visit to Atatürk's mausoleum in the capital Ankara by the public and political figures. The main event will take place in Samsun where a 1,919-meter-long Turkish flag will be carried by some of the nation's youth. Then, a group of amateur actors will re-enact the landing of Atatürk and his comrades-in-arms in Samsun after they arrived in a shoddy boat, risking capture by the Allies. Another ritual will be the handover of soil brought from the birth house of Atatürk in Greece's Thessaloniki wrapped in a Turkish flag. Then, an aerial stunt team from the Turkish Armed Forces is scheduled to perform aerial stunts.

On the youth and sports side, the day will be a challenge for high school and grade school youth who have been rehearsing for days to stage well-choreographed dance shows. The scale of the celebrations involving dances and human pyramids were downgraded in the recent years, much to the joy of students who were forced to train for days under sweltering heat and in tights to perfect the athletic routines - although they are still in place in many cities. Critics of the celebrations had complained for years that the ceremonies to mark this important date were reduced to a militaristic ritual characteristic of the old Soviet regime and current North Korean regime. In turn, the government began organizing sports events such as marathons and tournaments in the recent years as part of festivities.
Last Update: May 18, 2015 10:43 pm
RELATED TOPICS