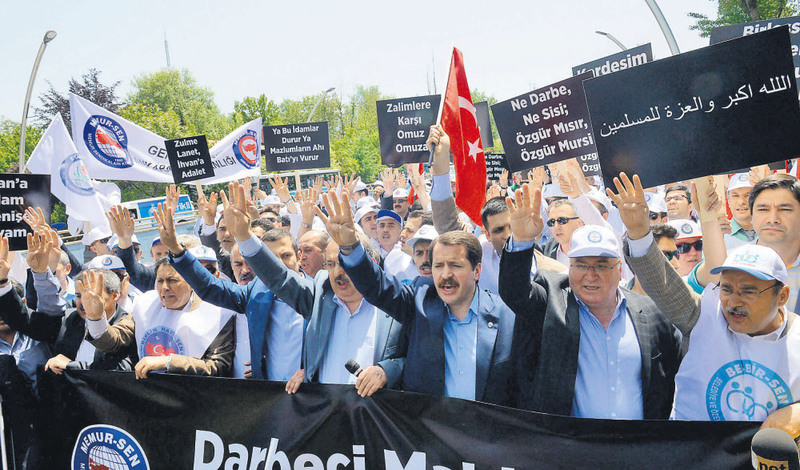 Demonstrators from Memur-Sen, a prominent labor union, made Rabaa signs at a rally condemning the death sentence for Morsi and others outside the Egyptian Embassy in Ankara.
by Daily Sabah with Wires May 18, 2015 12:00 am

A death penalty ruling for Egypt's deposed president Mohammed Morsi continues to make waves in Turkey. From Trabzon in the north to Kilis on the Turkish-Syrian border, people took to the streets yesterday to protest last week's verdict by an Egyptian court that imposed the death sentence on Morsi and 121 others for a mass jailbreak in 2011.

A group of demonstrators from several nongovernmental organizations (NGOs) rallied outside the Egyptian embassy residence in the capital Ankara after a march to condemn the coup regime in Cairo - headed by Abdel-Fattah el-Sissi - and the Egyptian court. Speaking on behalf of the crowd, Ali Yalçın, head of a major labor union of civil servants, said, "We do not recognize the illegitimate verdicts handed down by killers in Egypt, and we stand by the Egyptian public who do not take up arms. Morsi and others should be released and he should be reinstated as president," he said. Yalçın said the international community, which remained silent on the ousting of Morsi, failed to take a stance on the issue, further demonstrating how the world lacked justice. He called on Iran, Saudi Arabia, the United Arab Emirates and countries in the Middle East not to remain silent. "If they remain silent, history will not forgive them," he said.

In Istanbul, a group of lawyers from an NGO staged a protest outside the city's largest courthouse in Çağlayan. They condemned the "illegal acts" of the coup regime, and said the death penalty for a president elected by the people was the latest stage of "oppression" imposed on the Egyptian public.

A group of prominent Islamic scholars and academics also issued a joint statement condemning the verdicts "that lacked any legitimate ground." "The United States, the West and regimes in several Arab countries encouraged the oppressors in Egypt to issue this verdict by ignoring the massacres and violation of rights [against pro-Morsi supporters]," the statement said.

Speaking to Anadolu Agency, Cihangir İşbilir, coordinator for International Rabaa Platform - an Istanbul-based NGO named after the square where pro-Morsi groups rallied against the coup - said the death sentences were "a threat not only to Morsi and Egypt but also Turkey and all elected governments in the region. " İşbilir said Muslims should see it not as an internal affair of Egypt but as "a matter relevant to ummah," referring to the global Muslim community. "The coup regime and its supporters have already killed hundreds of people and they may go ahead with the execution [of Morsi and others] as well. Muslims should give a strong, global reaction to this decision otherwise it will traumatize the [Islamic] community for decades to come," he said.

The death sentence has drawn fierce criticism from Ankara. President Recep Tayyip Erdoğan, one of the few outspoken opponents of the coup regime, has accused the West of inaction over the death sentence. "Unfortunately, Egypt has issued a death sentence to an elected president who captured 52 percent of the votes. Egypt is returning to old Egypt. The West, unfortunately, still does not expose its stance against the coup leader el-Sissi. While [some] Western countries have been abolishing the death penalty, they are watching the death sentences in Egypt in complete silence. They are not taking action," he said on Saturday.

Morsi, who came to power as the country's first democratically-elected president following a revolution that toppled the autocratic regime of former President Hosni Mubarak, was ousted by a military coup in 2013. He and several members of the Muslim Brotherhood movement have been held in custody since then over a series of charges including inciting violence against anti-Morsi demonstrators, espionage and insulting the judiciary.
Last Update: May 18, 2015 9:36 pm
RELATED TOPICS