Suspicious packages cause blasts at HDP headquarters in Adana, Mersin 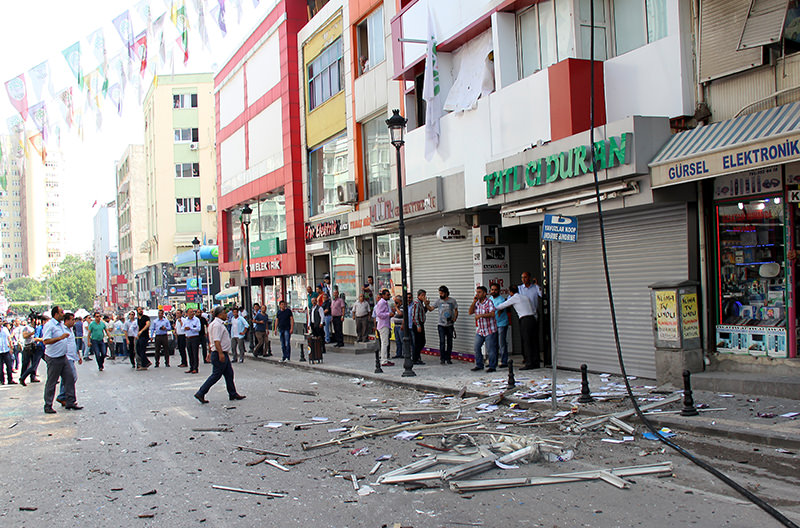 | AA Photo
by Daily Sabah with AA May 18, 2015 12:00 am
Simultaneous explosions have taken place at the pro-Kurdish Peoples' Democratic Party (HDP) provincial headquarters in Turkey's southern Adana and Mersin provinces on Monday.

A blast was heard in the HDP's Mersin headquarters, which was reportedly caused when a package containing flowers sent to the building was unpacked while in Adana, the explosion was caused by a cargo package.

It was reported that the explosions took place at around the same time in HDP's Adana and Mersin headquarters.

Adana provincial governor Mustafa Büyük told Anadolu Agency that two people were injured after a blast occurred in the chairman's room of the HDP office in Seyhan district of Adana.

He said that those injured were sent to hospital, and suggested the blast was deliberate.

"We are investigating the source of the blast and the type of explosive," Büyük added.

He said that the explosion happened in the kitchen of the building and that there were no injuries.

Police teams arrived at the scene of the blasts and firefighters were also deployed to respond to the minor fire which took place as a result of the blast.

HDP co-chairman Selahattin Demirtaş made a brief statement on his Twitter account following the attacks and noted that HDP's rally in Mersin will proceed as scheduled, despite the attacks. "We will be in Mersin at 5 pm today. With more enthusiasm, joy and a higher spirit. Everyone is welcome" Demirtaş said.

Prime Minister Ahmet Davutoğlu has strongly condemned the attacks, and ministers have also expressed their condemnations.

Turkey's Culture and Tourism Minister Ömer Çelik and Deputy Prime Minister Yalçın Akdoğan have denounced the attacks. Minister Çelik on his Twitter account has stated that he condemns the attack on HDP offices and expressed that he wishes a speedy recovery for those who were injured during the blasts.

Yalçın Akdoğan stated that the attacks were a plot organized by provocateurs who try to sabotage peaceful elections process.

Fikri Işık, Turkey's Minister of Science, Industry and Technology and Cevdet Yılmaz, the Minister of Development paid a visit to HDP's elections office in Diyarbakır following the blasts to express their sympathy with the HDP.

Gunmen attacked the HDP's headquarters in Ankara in mid-April.

Nobody was injured but bullet holes were visible on the building.

In November 2014, the Ankara Provincial HDP Assembly Member Ahmet Karataş was critically injured after a person stabbed him near the party's central headquarters in Ankara.