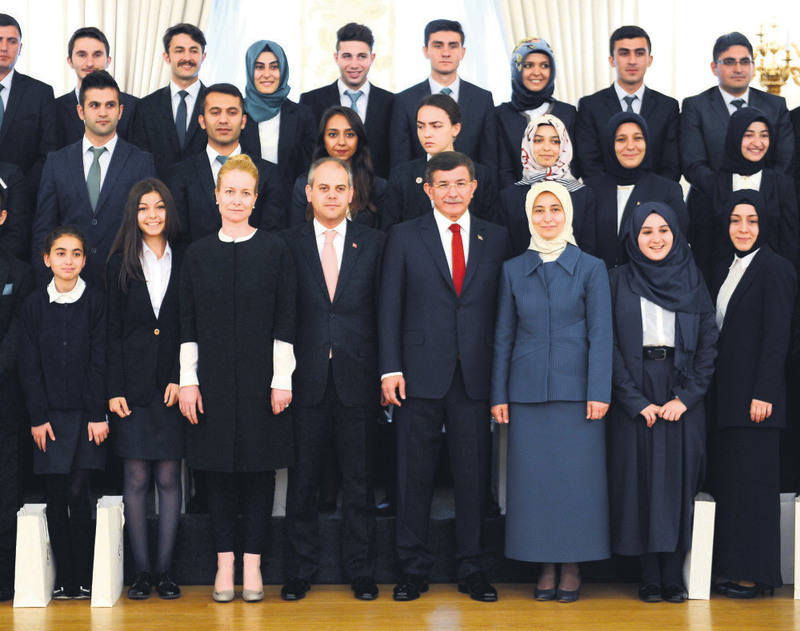 Prime Minister Davutou011flu posing with young people he met yesterday on Youth and Sports Day.
by Daily Sabah May 19, 2015 12:00 am

Yesterday Turkey marked the Commemoration of Atatürk, Youth and Sports Day, a national holiday focusing on the country's youth with sports and cultural activities. Addressing the youth of Turkey, Prime Minister Davutoğlu said youth now enjoy unprecedented freedom and urged them to stand up against injustice

The May 19 Commemoration of Atatürk, Youth and Sports Day, which combines the remembrance of the Turkish War of Independence with sports events, was marked yesterday across Turkey.

Addressing the youngsters, Davutoğlu said the past 12 years under the Justice and Development Party (AK Party) government has seen the abolition of restrictions imposed on freedoms such as freedom of thought and the headscarf ban for university students. He called on the youth to stand up against injustice and violations of human dignity. "It is only natural to raise your voice against any injustice in any part of the world without discrimination," he said.

"You are the children of a free country. We are not in the era of a single-party, nor in an era of coups. You have nothing to restrain you. Do not hesitate when you see something wrong, when there is oppression," Davutoğlu said. The prime minister said the youth should have different views and a youth with a uniform mindset was only peculiar to the Nazi and Soviet regimes. He urged them not to stay away from politics as the "coup regime of 1980 intended."

Receiving a group of youngsters in the Presidential Palace, President Erdoğan praised the "spirit of May 19," referring to the country's struggle for independence. "This spirit of standing against challenges together with determination is the essence of New Turkey," he said.

Erdoğan also warned the youth "not to fall for the parallel structure and separatist organizations," referring to the controversial Gülen Movement and the terrorist organization PKK, and said those organizations had designs on the youth.

The president also mentioned his efforts to decrease the voting age to 18 during his tenure as prime minister. "Turkish history has examples of commanders at the age of 15, sultans at the age of 17. It does not make sense to set the compulsory age for election to an office to 30 (as was the case before the government lowered it)," he said.

The day originally marked the anniversary of the arrival of Mustafa Kemal Atatürk, the founder of modern Turkey, in the Black Sea city of Samsun in 1919. His trip is considered the first step toward the country's war of independence following World War I. Since 1938, the day has also been celebrated as Youth and Sports Day, much to the chagrin of the youth who reluctantly take to stadia to perform bizarre feats such as human pyramids in scenes reminiscent of North Korea, according to its critics. In recent years, the gymnastic feats have largely been scaled down, and sporting events such as races replaced celebrations in stadia in most parts of the country. The youth, picked from among high school students, also exhibited folk and modern dance shows in nationwide celebrations.
Last Update: May 19, 2015 10:36 pm
RELATED TOPICS