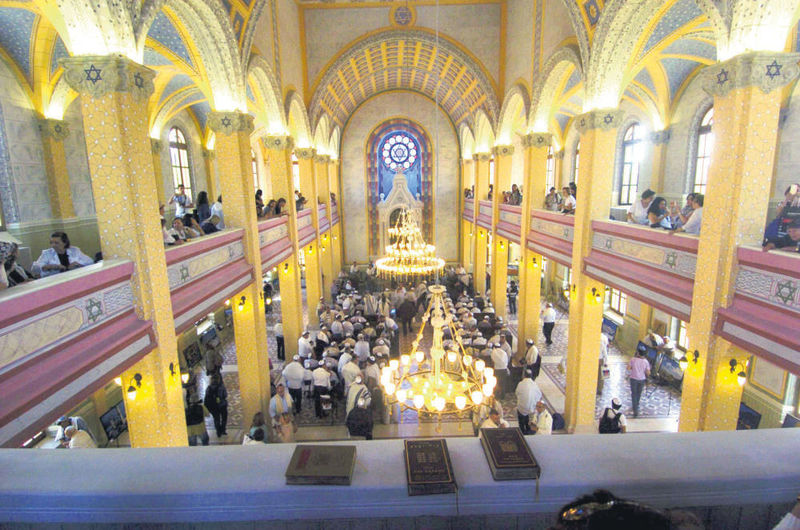 by Daily Sabah with Wires May 19, 2015 12:00 am
The Great Edirne Synagogue in the eponymous northwestern Turkish province has attracted a large number of visitors over the past two months since it reopened following its restoration.

The synagogue, touted as Europe's third-largest Jewish temple, has hosted 25,000 visitors since it was opened on March 26 in a splendid ceremony attended by Jewish community leaders and high-ranking Turkish officials.

Yesterday alone, 500 Turkish Jews arrived from Istanbul where the country's Jewish population is concentrated, to mark Rosh Chodesh, the beginning of the Jewish month of Sivan. Turkish Jews also visit neighborhoods in Edirne where they spent their childhood, as the city was once home to a sizeable Jewish community.

Beti Mukater was among the faithful who traveled by buses from Istanbul in the early hours yesterday. Speaking to Doğan News Agency, she said, "I am also here as an old resident of Edirne. My ancestors used to live here. The house where my parents and grandparents lived now lies in ruins but their graves are here. So, I prayed for them." Suzan Altras was another Jew who has traced her ancestors to Edirne. She praised the synagogue's restoration, and said, "It has become a beautiful place. We always feel emotional when we come here."

Turkey's Jewish community is mainly concentrated in Istanbul, home to several synagogues that are in relatively good shape compared to the former state of the Great Edirne Synagogue.

The Great Edirne Synagogue was built in 1905 by the order of Sultan Abdülhamid II to replace 13 separate synagogues destroyed by a huge fire that devastated the city. The building was designed by French architect France Depre and opened in 1907 to serve as a house of worship until 1983, by which time the city's Jewish community had dwindled to almost zero.

Through the restoration process, the synagogue's lead domes, splendid interior and Torah scrolls were restored to their former glory. The synagogue, also known as Kal Kadoş Agadol, features architectural characteristics of the Leopoldstadter Temple, once the largest synagogue in Vienna. Edirne is believed to be the birthplace of the Maftirim repertoire, mystic Sephardic Jewish music.
Last Update: May 19, 2015 11:05 pm
RELATED TOPICS