More tablets for students as Turkey looks to improve education 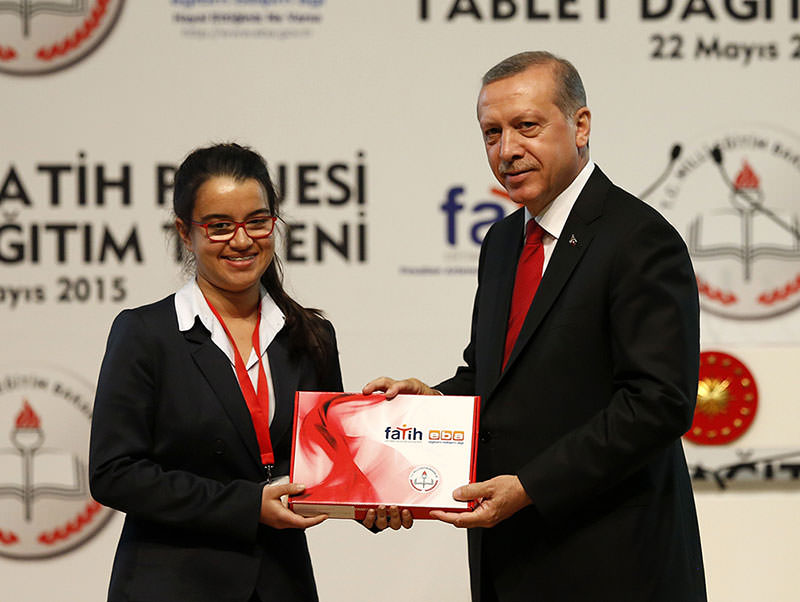 | AA Photo
by Daily Sabah May 22, 2015 12:00 am
Turkey's ambitious FATİH project, which aims to have every student in the country working on tablet computers, delivered 700,000 tablets on Friday to students all across the country.

President Recep Tayyip Erdoğan launched the next stage of the project, which started five years ago, in a ceremony in the capital Ankara, where he handed the computers to students.

The government has previously handed over 737,000 tablets to school children and teachers, and Friday's distribution was mostly for ninth graders.

Erdoğan said at the ceremony that over 10 million tablets would be delivered between 2016 and 2020 to students and teachers.

Tablets will interact with smart blackboards in classrooms as part of the project that aims to make learning fun and lessons more comprehensive, thanks to online access.

The pilot stage of the FATİH project was launched in 2010 when 8,500 tablets were delivered to 52 schools in 17 provinces. In 2013, 49,000 more tablets were delivered. The Ministry of Education also furnished high school classrooms with 84,921 smart boards. FATİH, which also means conqueror, is an acronym for Fırsatları Artırma ve Teknolojiyi İyileştirme Hareketi (Movement to Increase Opportunities and Technology).

Tablets, produced locally, have 2 GB of RAM and 32 GB of internal memory. They boast a high-resolution 10.1-inch screen, Wi-Fi connection and camera. They also have pre-installed educational apps.

Turkey's education system has undergone a number of major changes in the past decade, including new exams, a 12-year compulsory education, and a reduction in the number of crowded classrooms, which is an issue that has been plaguing the crumbling education system. The FATİH project seeks to boost teacher-student interaction by connecting them through a network.