Palestinian doctors reach out to compatriots in Turkey 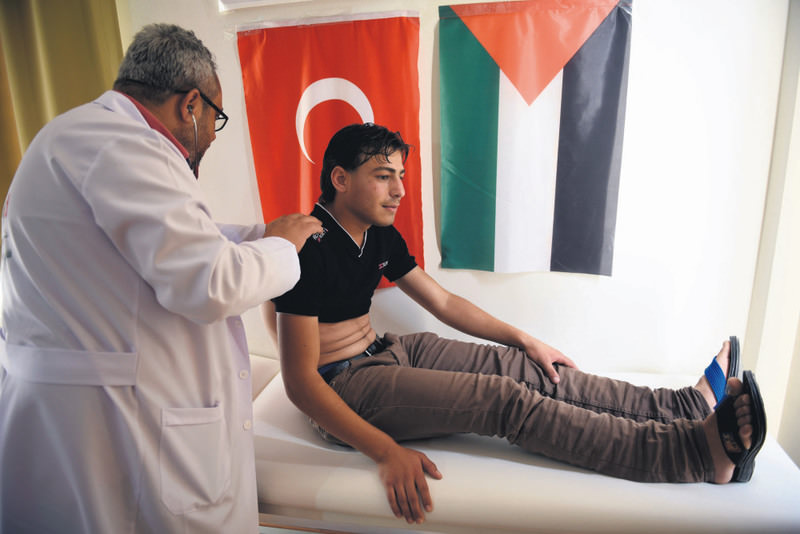 by Anadolu Agency May 22, 2015 12:00 am
Palestinian doctors in Turkey hit the road to help fellow Palestinians who arrived in Turkey after fleeing the conflict in Syria. The doctors offer free medical exams to hundreds, saying they help Turkey handle the refugees.

A group of Istanbul-based doctors of Palestinian origin travel to several Turkish cities to help fellow Palestinians who have fled into the country from neighboring Syria. The delegation of doctors, including cardiologists, pediatricians and dentists, provide free medical exams to Palestinians as well as Syrians. They have traveled to Ankara, Osmaniye and Şanlıurfa so far, and their last stopover was the southern province of Mersin where they provided checkups for 400 Palestinian families.

Doctors also donated medicine to Palestinians with chronic diseases. Dr. Muhammad Amin, head of the Palestinian Doctors' Association, which was established by Palestinian doctors in Turkey, said their efforts were "to relieve their Turkish counterparts' burden a bit," as Turkey hosts more than 1.8 million Syrians.

Amin and others founded the association four months ago. "Our main goal was to help our Palestinian compatriots who experience communication problems with Turkish medical staff," he said, adding the majority of Palestinians in Turkey are those who were living in Syria but then became displaced by the ongoing war. "Turkey already supports Palestinian and Syrian refugees, and we want to show that we are with Turkey in helping the refugees. We are grateful to Turkey for its help to Palestinians," he said.

Abu Abdurrahman Mishinish, 60, is one of the Palestinians the doctors examined. He fled into Turkey with his family last year as the war escalated. He has run into difficulties from time to time at Turkish hospitals, however, as he does not speak Turkish. "I am glad Palestinian doctors help us. I felt like I was at home when I saw them," he said.
Last Update: May 22, 2015 11:15 pm
RELATED TOPICS