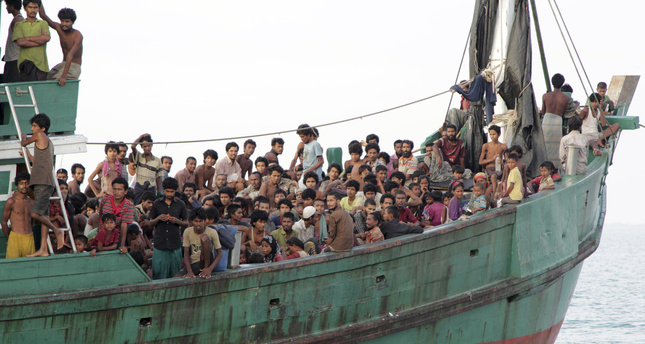 | AP Photo
by Daily Sabah May 22, 2015 12:00 am
President Recep Tayyip Erdoğan on Wednesday guaranteed that Turkey would pay $1 million to the International Organization for Migration (IOM) and the United Nations High Commissioner for Refugees (UNHCR) to help Rohingya and Bangladeshi Muslim migrants stranded at sea.

On Wednesday, President Erdoğan talked with Malaysian PM Najib Razak in a conversation though the phone and offered humanitarian aid and pledged to pay $1 million to the IOM and the UNHCR , according to a statement from his office.

The Turkish foreign ministry later said in a statement that it was exploring ways of organizing a humanitarian aid operation to reach Rohingya and Bangladeshi muslims stranded at sea.

Turkey, one of the largest sponsors of the IOM, already sent a navy ship to the coast off Thailand and Malaysia to carry humanitarian aid to the thousands of stranded Rohingya Muslims.

An estimated 4,000 of Myanmar's Rohingya Muslims, as well as other migrants from Bangladesh, are stranded with little access to food or water after Malaysia, Indonesia and Thailand announced they would not allow migrant boats to land on their shores.

On Wednesday, however, Malaysia and Indonesia reached an agreement and said they would no longer turn away boat people, a breakthrough in the region's migrant crisis that came just hours after hundreds more starving people were rescued at sea.
Last Update: May 22, 2015 9:02 pm
RELATED TOPICS