Turkey marks anniversary of the coup that started it all 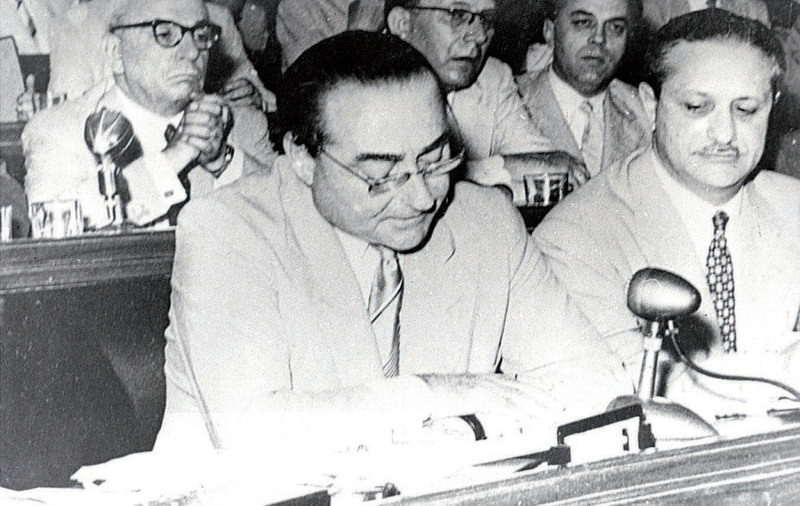 Turkey yesterday marked the 55th anniversary of the May 27 military coup, the first in the history of the Republic of Turkey, which paved the way for more military takeovers of democratically elected governments

The last vestiges of military tutelage dominating Turkey for decades disappeared after the government did not bow down to an ultimatum from the military in 2007. Yet memories of the country's first m ilitary coup still haunt the public 55 years later. Adnan Menderes, the country's first democratically elected prime minister, remains the only prime minister hanged after a military coup in one of the darkest periods of Turkish history.

On May 27, 1960, a group of high-ranking military officers toppled the Democrat Party (DP) government in a coup 37 years after the foundation modern Turkey. Their excuse for the coup was that the ruling party was leading Turkey to a regime of oppression and down a path of political turmoil. The DP, under the leadership of Menderes, was the first democratically elected party to win elections during the early history of the fledgling Republic long ruled by a de facto party established by the Republic's founder, Mustafa Kemal Atatürk.

The DP won the 1950 elections with more than half the vote. Its socio-economic policies helped the party to cement its success in the 1954 and 1957 elections.

Nevertheless, anti-government protests gained momentum and student riots at universities led to the declaration of martial law. The main opposition Republican People's Party (CHP), chaired by the country's second president, İsmet İnönü, was the government's strongest critic, and eventful CHP rallies further fuelled tensions between the CHP and DP. The CHP is accused of inciting unrest among the public against what it called the dictatorship of the Menderes government.

On May 21, 1960, a group of cadets from the Turkish Armed Forces War Academy took to the streets, which marked the first sign of the upcoming coup. Six days after the cadets' "silent march," a group of high-ranking military officers calling themselves the National Unity Committee, led by General Cemal Gürse, declared the coup, removing the government and dissolving Parliament. In a coup declaration broadcasted on the radio, coup leaders said: "A crisis of democracy and public unrest forced the Turkish Armed Forces to take over the rule of the country against a likely civil war."

Menderes and his Cabinet members, President Celal Bayar, DP lawmakers, Chief of Staff Rüştü Erdelhun, some top military officers opposing the coup and bureaucrats were detained. Menderes and his colleagues were charged with crimes, including high treason and misuse of public funds, and were subsequently arrested. They were imprisoned on Yassıada, an island in the Sea of Marmara, where they were tried for the abovementioned charges at a trial that took place between October 1960 and September 1961. Then Foreign Minister Fatin Rüştü Zorlu and Finance Minister Hasan Polatkan were hanged on Sept. 16, 1961, and Menderes was hanged a day later.

Today, Yassıada, a symbol of the coup, is undergoing a renovation as part of the "democracy island" project. There, a monument in memory of Menderes, Zorlu, Polatkan and other hanged politicians is planned to be erected. As for the late politicians, Parliament passed a law in 1990 that restored their honor and enabled the transfer of their bodies, which were buried on another island, to graves located under a monument dedicated to them in Istanbul.

The 1960 coup encouraged future military interventions in 1971, 1980 and 1997, as the military, the self-proclaimed defender of the Republic, intervened in the country's governance at times when it saw it as necessary - especially when the broadly interpreted secularism of the country and public safety were considered to be in danger. The 1980 coup was justified by the chaos brought by clashes between left-wing and right-wing movements, though it only served to marginalize people further after conducting a brutal crackdown and executing people from both groups. Just as the country was seeking to escape the clutches of military tutelage by electing a party catering to the conservative population, the military managed to oust the government in 1997 by threatening a coup.
Last Update: May 27, 2015 9:32 pm
RELATED TOPICS