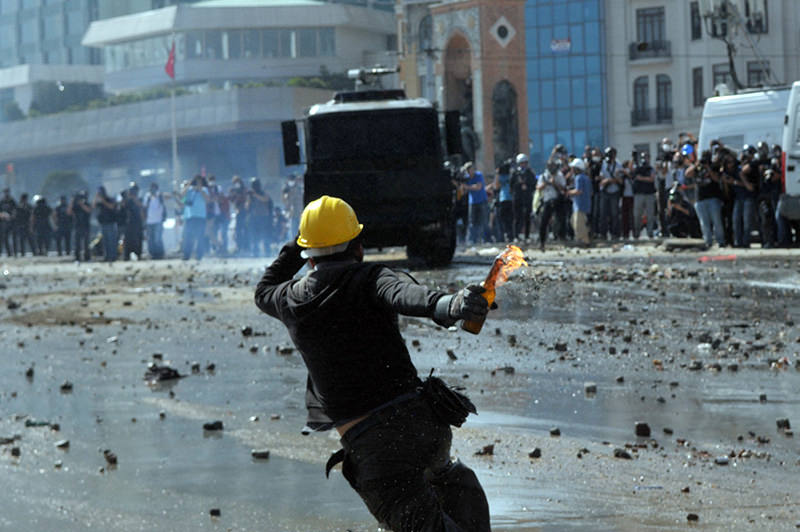 by Daily Sabah May 28, 2015 12:00 am
Two years after the violent riots, groups that pioneered the infamous Gezi Park protests in Istanbul pledged to mark the anniversary at the park on Sunday, the day that the initially peaceful protests turned violent.

The anniversary of the Gezi Park protests will be marked at the eponymous site, which is currently off-limits to any rally, an umbrella group of protesters announced.

The Taksim Solidarity Platform issued a press statement on Wednesday and called the public to join them on May 31 for the anniversary at Gezi Park, adjacent to Istanbul's famous Taksim Square. The group also called for gatherings at two parks in the Beşiktaş and Kadıköy districts of Istanbul.

Mücella Yapıcı, an architect who was among the leaders of the platform, said at a press conference that their call for proper urbanization was joined by a call for democracy that spread through Turkey on May 31, four days after the protests started in Istanbul.

The Gezi Park protests were initially a peaceful demonstration conducted by a small number of activists opposing the redevelopment of the park for reconstruction of an Ottoman-era building to be a shopping mall. Their anger over plans to fell trees in the park that was long denied by authorities, quickly found support among environmentalists. Dozens of people camped out at the park to stop bulldozers from demolishing a retaining wall. Police intervened to clear the park, but things got out of hand when a police chief reportedly ordered the burning of the activists' tents. Under the pretext of protesting police brutality, several marginal groups quickly hijacked the protests, which turned into violent riots by June in Istanbul and the rest of the country. Eight people were killed in the subsequent violence that saw rioters armed with Molotov cocktails and stones clashing with the police. Supporters of terrorist organizations, including the PKK and the Revolutionary People's Liberation Party-Front (DHKP-C) joined the rallies and vandalized police cars and businesses in and around Taksim. Amid efforts to reflect the riots as simply protests against the cutting down of trees at the park, it was soon revealed that the incidents were a mass movement against the government. Summing up the purpose of the riots, Mehmet Ali Alabora, an actor supporting who supported them, tweeted that it was "not about Gezi Park."

Another call to mark the anniversary at Gezi Park last year failed to drum up support. A small group of protesters left flowers in the park and dispersed. However, rioters affiliated with terrorist organizations gathered in other districts of Istanbul and clashed with police.
Last Update: May 28, 2015 2:32 pm
RELATED TOPICS