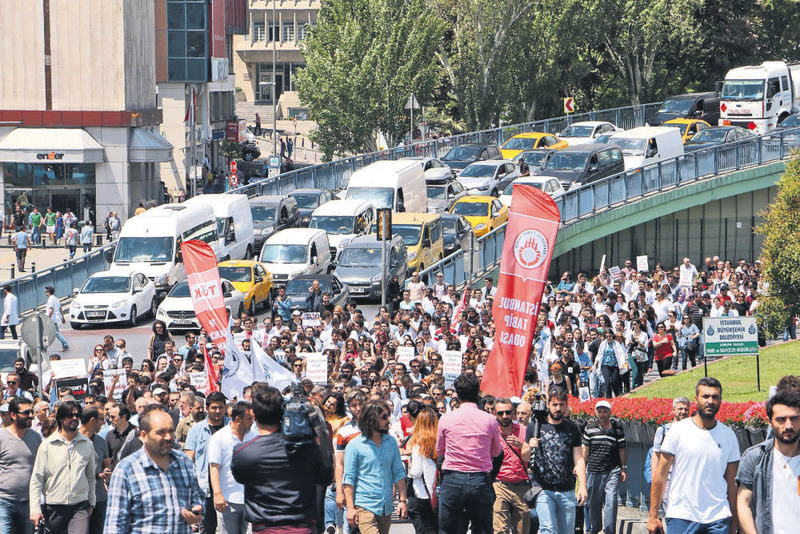 Doctors and nurses rallied in Istanbul yesterday to protest violence against doctors and other health care employees.
by Daily Sabah with AA Jun 01, 2015 12:00 am

Doctors staged a one-day strike to highlight violence against physicians after a gunman shot a medic dead on Friday.

"Today we mourn Dr. Kamil Furtun who died of a gunshot while on duty on May 29 in Samsun," said Alper Alıcı, the head of the Istanbul branch of the Turkish Health Union, in a public statement read aloud in Istanbul yesterday.

Statements condemning the shocking killing are being read publicly across Turkey by Health Union members.

"We repeatedly warned the authorities about the violence targeting doctors, but they continued to underestimate it and refused to take any strict measures," he said.

Furtun, 56, was shot dead on Friday in a hospital in the northern province of Samsun by a 30-year-old man who claimed to have psychological problems.

Identified as İsmail K., the suspect was detained by police with the gun just hours after the killing.

"I got bored. I have such hobbies. I like it [killing]; that is why I shot him," İsmail K. told journalists as he was being detained, according to local media.

Recalling the murder of Dr. Ersin Arslan, who was stabbed to death by the relative of a patient in 2012 in Istanbul, Alıcı said: "Nothing has changed since then."

"The amount of violence against health professionals has increased in recent years. It is not the first murder and will not be the last if strict measures are not taken," Alıcı said.

Müezzinoğlu said in a televised interview that they had "zero tolerance" for violence toward medical staff and offered legal advice for personnel who fall victim to acts of violence. Müezzinoğlu said some 700,000 medical staff were handling about 3 million people and "instances of unpleasant incidents happen, unfortunately."

According to statistics, over 31,000 acts of violence were reported against medical staff between 2012 and 2015. Doctors suffered most from the violence with the majority of incidents being verbal assaults while 14,250 incidents involved physical violence. Four doctors have been killed at hospitals in the past 10 years.

Labor unions of medical personnel proposed a radical measure to tackle the violence to deter the perpetrators from hospitals. They called for the implementation of new regulations that would ban those involved in acts of violence toward medical staff from social security benefits for six months.
Last Update: Jun 02, 2015 12:08 am
RELATED TOPICS