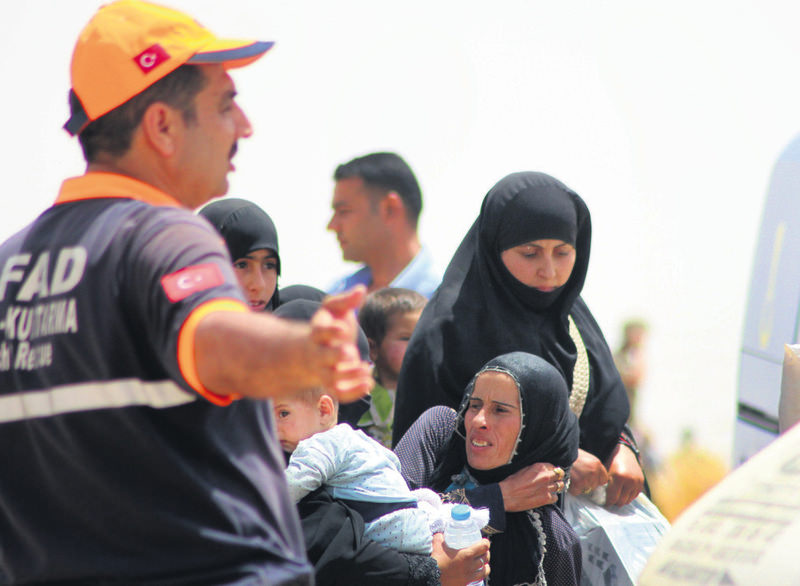 by Daily Sabah with Wires Jun 04, 2015 12:00 am
The Turkish border with Syria saw a new influx of displaced Syrians seeking shelter over the past two days as Kurdish militants engaged in a new offensive against the Islamic State of Iraq and al-Sham (ISIS) in Syria.

Quoting a Turkish official, Reuters said more than 3,000 Syrians have fled to Turkey since Wednesday. Kurdish groups have been fighting ISIS in Tel Abyad, a town in Syria's Hassakah province situated opposite Akçakale, a town in the Turkish province of Şanlıurfa.

Anadolu Agency reported that about 1,000 Syrians were registered for entry into Turkey in Akçakale yesterday by Disaster and Emergency Management Authority (AFAD). Most are from Ras al-Ain district where clashes between Syrian Kurds and ISIS concentrated. Displaced Syrians are being sent to camps across Turkey's lengthy border with Syria.

Adnan Muhammad, hailing from the Nustel village of Tel Abyad, told Anadolu Agency that his village and others in the vicinity were razed to the ground due to clashes and U.S.-led coalition's airstrikes. He said he has seen charred corpses in the houses all around the area. "We had to run. I have still relatives there. They want to come here but they are afraid of approaching the border for the fear that warplanes might raid," he said. Muhammad said thousands were trapped in the conflict zone.

Turkey hosts about 1.8 million people who were displaced by the four-year-old conflict that worsened after the emergence of ISIS. Kurdish groups controlling northern towns near the Turkish border have struggled to drive out ISIS fighters.

The country last seen such a large flow of refugees from Syria in September 2014 when nearly 250,000 Syrian Kurds from Kobani, another town where ISIS battled Kurdish groups, arrived in the country.