Three dead, over 100 injured after explosion at HDP rally in southeastern Turkey 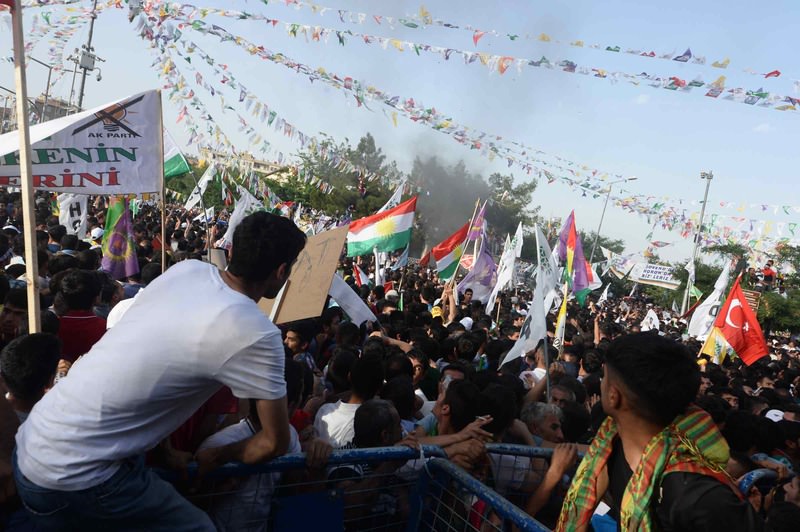 
A third person caught in a bomb attack on a pro-Kurdish party's election rally has died, Anadolu Agency reported on Saturday.

Two people have died, while over 100 people have been injured on Friday in two explosions at the pro-Kurdish Peoples' Democracy Party (HDP) rally in Turkey's southeastern province of Diyarbakır. Many people were treated at hospitals and twenty people were still in critical condition, Doğan news agency reported on Saturday. Two blasts several minutes apart rocked the rally. It was the second blast which caused the casualties.

Officials have not confirmed whether the blast was caused by bombs. But the Doğan news agency, without citing sources, said Saturday that one of the explosions was caused by explosives placed in a gas cylinder. No suspects have been yet identified, but security camera footage was being analysed, the chief prosecutor in Diyarbakir said. Five prosecutors from the chief public prosecutor's office have been appointed to investigate the incident.

Turkey's Food, Agriculture and Livestock Minister Mehdi Eker on Saturday has said that a TNT explosive charge was remotely detonated with a cellphone at the HDP rally.

Eker, who is originally from the southeastern city of Diyarbakır noted that all evidence was collected from the explosion scene and will be investigated, while he assured that the perpetrators of the attack will most certainly be caught and punished.

"This is a vile and vicious attack" said Eker, adding that the attack targeted democracy in Turkey and the June 7 general elections.

The footage aired on a local Kurdish TV channel showed that the rally organizers first announced on loudspeakers that the explosion had been caused by a fault in an electric transformer and urged people to stay calm. However, Energy Minister Taner Yıldız Yıldız clarified that after initial investigations the blast was clearly not caused by the transformer itself.

The explosion took place just before HDP Chairman Selahattin Demirtaş was set to address the crowd. The HDP leader later issued a call for calm. Demirtaş urged supporters not to take to the streets and show moderation, tweeting that "peace will win".

Turkish Prime Minister Ahmet Davutoğlu has commented Friday on the deadly explosion, saying: "It is not yet clear whether this was an attack or an accident. Whatever caused it, we will find out."

"No matter why, whoever has done this attack, the perpetrators target Turkey and Turkish democracy," Davutoğlu said in a late night interview on private KonTV.

He added that the bombings were carried out by "dirty hands" or "circles" that were aware of the "heavy consequences of such manipulations".

After the blast, some groups of people pelted stones on the police in Diyarbakir's Ofis district. A police vehicle was also set on fire. Police responded with tear gas and water cannon in an attempt to disperse the protesters.

Davutoğlu urged the people of Diyarbakır to not succumb to any provocation attempt.

"As the prime minister, I always condemn any attack against any of the opposition parties just as I react harshly to the one against [the ruling] AK Party," he said, adding that all necessary precautions were being taken.

The blast came just two days before Turkey goes to the polls Sunday.

The HDP is standing as a party for the first time in a general election, seeking to pass the 10 percent threshold that will allow it to gain seats in the Grand National Assembly.

The party currently has lawmakers who stood as independents in the 2011 election and joined the party after being elected.

One of the biggest highlights of the election is that if the party passes the electoral threshold, it will be able to win at least 50 to 60 seats, which will be seats lost for the largest party in their constituencies.