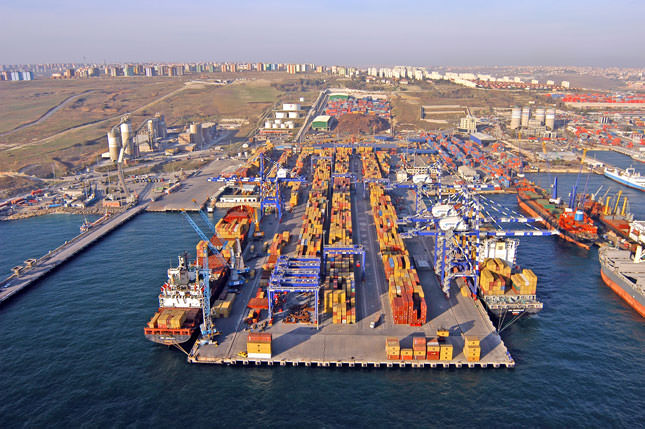 by Anadolu Agency Jun 05, 2015 12:00 am
Turkish cabinet ministers highlighted the achievements of their ministries under the current term of the government in interviews with Anadolu Agency Friday ahead of the June 7 parliamentary election.

Turkish Economy Minister Nihat Zeybekci said that it was an achievement that Turkey's exports had increased from $36 billion to $171 billion, an increase of $135 billion during AK Party's rule.

Zeybekci said that the economy turned around "from being a passive economy to an active one".

"In this period, we have determined what to do in order to reach $500 billion exports, increase national income to $25,000 and achieve the government's 2023 targets," he said.

He added that his ministry directly supported overseas purchases of high technology as well as backing exports from Turkey.

Zeybekci said that the ministry under him solved the problems of exporters and investors, and supported fairs and promotions organized by them abroad.

"These kinds of international projects will increase Turkey's importance and value," Yildiz said.

He noted that the TANAP pipeline project would move through Turkey's 21 provinces, employ about 5,000 people and provide nearly $10 billion cash flow to the Turkish economy.

Finance Minister Mehmet Simsek cited attaining fiscal discipline as the most important achievement of his ministry, which he claimed saved the country from debt and interest.

"As of May 14, 2013, we totally paid our debts to the International Monetary Fund and have moved to investment and services budget from an interest budget," Simsek said.

He said that the real interest rate, which was 25.4 percent in 2002, was lowered to 2.6 percent in April 2015, adding that his ministry had allocated more funds to health and education.

Minister for Family and Social Policies, Aysenur Islam said that his ministry had launched social support programs in several provinces during her term.

Islam said that the programs tackled the complicated issues of domestic violence, drug use among children and early marriages in Turkish families.

Health Minister Mehmet Muezzinoglu highlighted Turkey's vaccination project that would allow each citizen to save the $500 vaccination cost.

"We have solved the water problems of 76 provinces," Eroglu noted.

Former Minister of Transportation, Lutfi Elvan said that the government built 29 more airports, while only 26 had been built in 80 years before the current government took power.

He also highlighted the several speed trains initiated under his term. Elvan said that the ministry had built 18,000-kilometer long dual carriageway.

"Also, the $9 billion highway project between Istanbul and Izmir is ongoing and is scheduled to serve the people by 2017," he added.

Former Interior Minister, Efkan Ala said that the ministry under him realized legal regulations to maintain peace and security of citizens.

He said that the regulations encompassed police, gendarmerie and coastguards, which paved the way for them to serve people more outdoors instead of them getting stuck inside offices.

Elvan, Ala and Justice Minister Bekir Bozdag had resigned on March 7 ahead of the parliamentary election in line with the country's constitution.

Minister of Science, Industry and Technology Fikri Isik said that his ministry had completed efforts to build an Informatics Valley in the western province of Kocaeli.

He said that the ministry also launched a project to make electric cars and produce the satellite GOKTURK-2, and would launch another TURKSAT 6 satellite into space.

"To date, 2,626 tutoring classes had applied and 2,228 of them have been examined," Avci said, adding that 364 of them had officially been turned into private schools and 401 were closed down.

Avci also noted that Turkish girls now had the freedom to attend state schools with their headscarves on.

About 56 million Turkish citizens will vote in the country's 25th general election to elect 550 members of parliament on June 7.