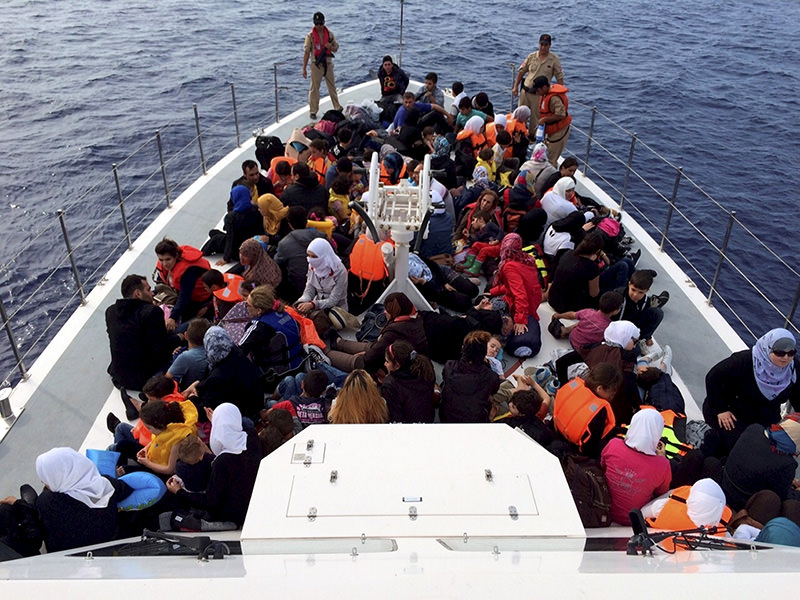 | AA Photo
by Daily Sabah with Wires Jun 08, 2015 12:00 am
The Coast Guard nabbed 166 Syrian migrants aboard two boats, one carrying a Lebanese flag and the other a U.S. flag, in the Mediterranean Sea late Sunday. Both boats were about to sink due to overcrowding when the Coast Guard rescued the migrants who were sailing to Europe.

The Coast Guard first detected a boat with three Syrians off the coast of Finike in the southern Turkish city of Antalya. The Lebanese-flagged boat was taking water when troops arrived and pulled three migrants to safety before the boat submerged.

Another boat, carrying a U.S. flag, was pursued in the area after Coast Guard officials noticed a crowd aboard. The boat was stopped sank shortly after 163 Syrian migrants were transferred to Army boats. The rescued migrants were housed in a sports hall in Finike and they will be sent to refugee camps on the Turkish-Syrian border.

Illegal immigrants traveling in heavily overcrowded boats on the Mediterranean and Aegean seas constantly risk their lives, and the Coast Guard often saves them from certain death at sea. Last week, 49 Syrian migrants, including children, were stopped by Turkish troops as they were traveling to a Greek island in the Aegean Sea on a small rubber boat. Troops rounded up the migrants, who would have most likely failed to reach their destination.

U.N. refugee agency (UNHCR) officials say an average of 600 people try to reach Greece, a main gateway to Europe, every day via Turkey. "The refugees cross the eastern Aegean Sea from Turkey in small, flimsy boats and inflatable rafts. They are landing in as many as 15 different Greek islands or are being rescued at sea by the Greek Coast Guard," UNHCR spokeswoman Melissa Fleming told reporters last week. "The largest arrivals have been on Lesvos, Chios and Samos and the Dodecanese Islands, particularly Kos and Leros. Smaller numbers of refugees have also been crossing through Greece's land border with Turkey at Evros," she said.
Last Update: Jun 08, 2015 4:31 pm
RELATED TOPICS