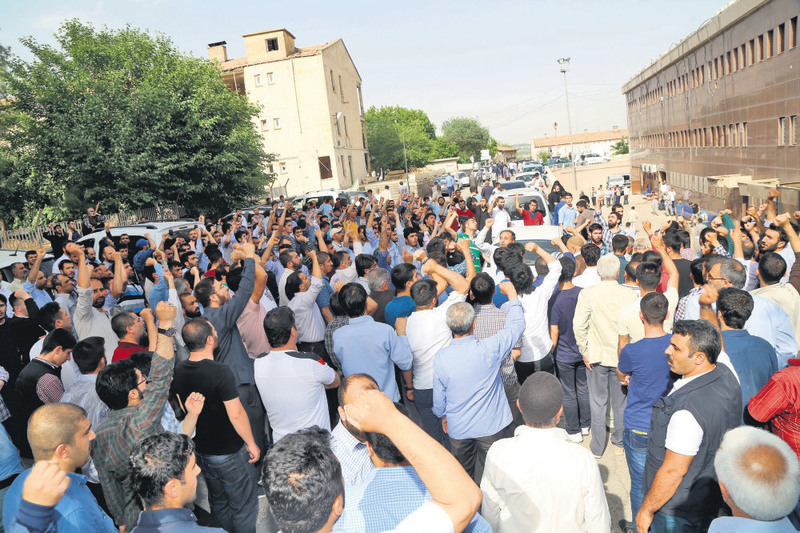 An angry crowd condemning the killing of Aytau00e7 Baran gathered outside the morgue where his body was kept.
by Daily Sabah Jun 10, 2015 12:00 am

The killing of a Kurdish figure in the southeastern city of Diyarbakır on Tuesday, allegedly by a terrorist organization drawing support from a rival Kurdish group, heightened tensions in the city with violence breaking out overnight

Diyarbakır, a predominantly Kurdish city in southeastern Turkey, was rocked by the killing of Aytaç Baran, the head of the Yeni İhya-Der (Science, Service, Cooperation and Research Association) – a prominent nongovernmental organization (NGO) with ties to the Free Cause Party (HÜDA-PAR), a pro-Kurdish party heavily supported by conservative Kurds. His murder revived dormant tensions in the city and the region between rival Kurdish groups.

Baran was shot dead outside his office on Tuesday. Soon after, HÜDA-PAR supporters convened outside the office to protest the killing. The assassination was blamed on the Patriotic Revolutionary Youth Movement (YDG-H), an armed wing of the PKK and an adversary of HÜDA-PAR. Hours later, three more killings were reported. News agencies reported the victims were three men who are members of the HDP. Authorities announced 17 people were detained following the four killings and a number of weapons and munitions were confiscated.

Both the PKK and the HDP denied any connection to the killing of Baran. HDP Co-Chair Selahattin Demirtaş said "connections" between the killing of Baran and his party's members would only be revealed after an official investigation. He stressed that his party - that extols praise for jailed PKK leader Abdullah Öcalan and openly voices support for the PKK's actions - is not an armed organization.

Gunshots rang throughout Tuesday night in the city with rival groups clashing with each other. Two people were injured in the clashes. By yesterday morning, hundreds of shops in the city were damaged after gunfire was sprayed through the streets. Tensions were palpable in the city and troops were deployed on the streets to assist the police for the first time since the Oct. 6-7 incidents last year that led to death of 50 people in the country. Those incidents, which broke out in Diyarbakır and spread across the country, were a culmination of tensions between the PKK and HÜDA-PAR. Baran's friends said he was a "mentor" to Yasin Börü, a high school student who was among three men killed by a pro-PKK mob in Diyarbakır while they were delivering aid to poor families during the Oct. 6-7 incidents.

A lawyer for Baran claimed his client was threatened by the PKK before the murder. Abdülgani Orhan had claimed that Baran was called to the police station before the elections to be warned of a possible attack by the YDG-H.

Anadolu Agency reported yesterday that Baran had sustained fatal wounds after gunmen, who failed to shoot him on their first attempt, chased the running victim and opened fire again. The agency reported that the prosecutor's office was looking into "provocative" messages on social media targeting HÜDA-PAR supporters. A Twitter account allegedly linked to the YDG-H had released a photo of a man carrying a HÜDA-PAR flag and called on its followers to "target" him - although the account could not be verified.

Yesterday, separate funerals for the four people killed on Tuesday were held. Three HDP members slain in the attacks were buried in the morning as a large crowd gathered making victory signs associated with the PKK. Flags of the terrorist organization covered the graves. Funeral prayers were held for Baran later in the afternoon.

Burials were held at the same cemetery in Diyarbakır for all victims, but they were held at separate times to prevent a confrontation between two rival groups. Yeni İhya-Der, founded in 2005, is known for its close political alliance with the HÜDA-PAR and is a member of an alliance of NGOs in the Admirers of Prophet Platform umbrella group. A rally organized by the platform in April had attracted tens of thousands of people in an apparent show of force. The NGO has also been active in humanitarian work.

HÜDA-PAR is often linked with the Kurdish (or Turkish) Hezbollah - a terrorist group that was in a bloody feud with the PKK in the region in the 1990s and whose activities ended in the early 2000s. However, such a connection is denied by the party. HÜDA-PAR claims they are now a political force that does not engage in armed activities.

Though the HDP does not openly describe its rival as a movement linked to the Islamic State of Iraq and al-Sham (ISIS), this allegation was the main motivation during the Oct. 6-7 incidents, with groups linked to the PKK attacking the party's supporters after ISIS surrounded a Syrian Kurdish town on the Turkey-Syria border. HÜDA-PAR refutes the allegation but the situation remains volatile for both groups of Kurds.

Turkey's Kurdish community was long plagued by the PKK's bloody campaign of terror for Kurdish self-rule in the southeast that killed tens of thousands over three decades. Kurds have been both victims and supporters of the campaign at times. After years of policies ignoring Kurdish rights, the Justice and Development Party (AK Party) government reached out to the community by launching a reconciliation process to end PKK terrorism and restore peace to the region. The process is largely on track with the government gradually granting rights, such as allowing teaching in the Kurdish language and the PKK announcing it would withdraw from its hideouts in mountainous territories in the southeast. Experts say the incidents in Diyarbakır that came days after a bomb attack during an HDP rally that killed three might be an attempt to provoke tensions among Kurds, especially in an atmosphere of uncertainty after the elections.
Last Update: Jun 10, 2015 10:40 pm
RELATED TOPICS