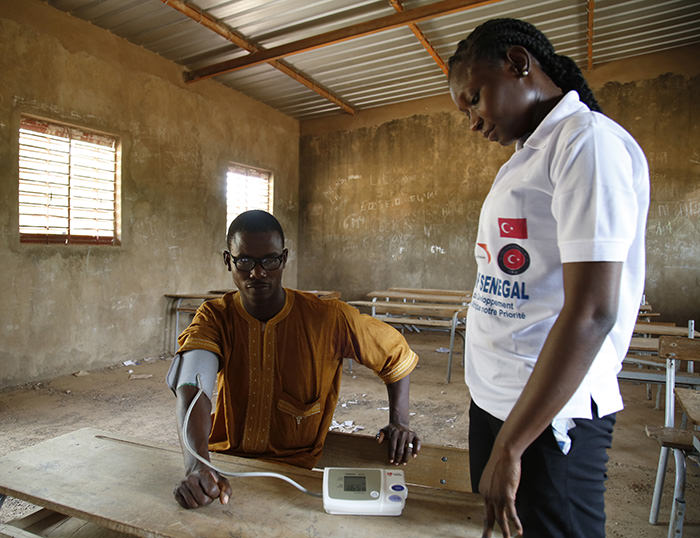 |AA Photo
by Anadolu Agency Jun 10, 2015 12:00 am
Turkish health and religious charities have been working flat out in the West African nation of Senegal ahead of the upcoming holy month of Ramadan.

The Turkish Cooperation and Coordination Agency (TIKA) says at least 1,000 people have undergone health screening in Senegal's Kedougou region-an urgent necessity in an area hit by the deadly Ebola virus.

Meanwhile, students in the Muslim-majority country are receiving free instruction in the Quran with new learning centers opened by a second Turkish charity.

TIKA has opened health centers and distributed medicine within the framework of a program launched at the beginning of this year.

"This region is under the threat of an outbreak of Ebola due to it being close to the Guinea border," TIKA Coordinator Kutluhan Yücel told Anadolu Agency.

In 2014 TIKA donated around $3 million to support projects in Senegal.

Ebola has no known cure and an infamously high mortality rate.

Meanwhile, the Fetih 1453 Association for Science, Education, Research and Relief has donated around $22,000 for centers to teach Quran.

The Turkish charity supported the Quran teaching centers for orphans after a report published by Anadolu Agency on February which described the lack of facilities for religious study.

Er told Anadolu Agency that three centers had opened their doors to 200 students, offering supplies such as food, cleaning products, first-aid materials and copies of the Quran, as well as financial help.

Er thanked Anadolu Agency for throwing light on the situation in the area and described the agency as "Turkey's eye on the world".
Last Update: Jun 10, 2015 3:58 pm
RELATED TOPICS