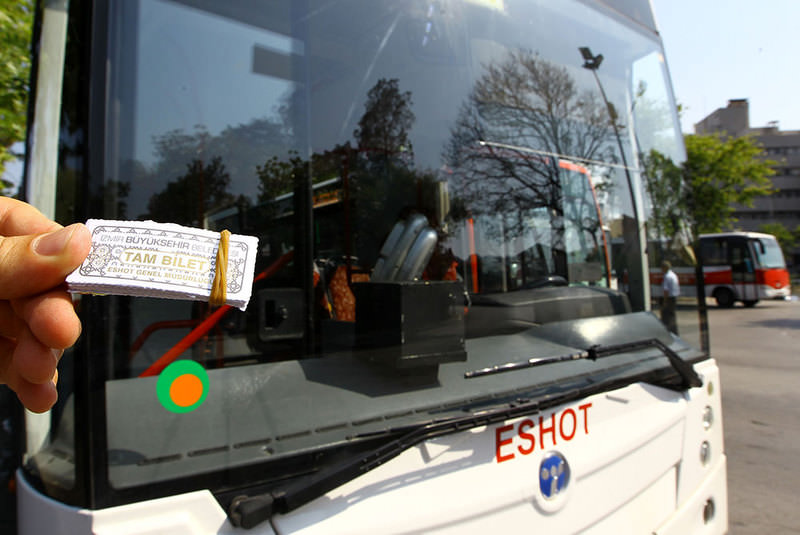 by Daily Sabah with AA Jun 11, 2015 12:00 am
Turkey's third largest city has returned to paper tickets in transport on Thursday as the problems in electronic card system have persisted since the beginning of June.

Izmir's Republican People's Party-led (CHP) Metropolitan Municipality held a tender in January to determine the city's new operator of electronic fare system that integrates bus, metro, light rail, ferry and other municipal services. The system's 16 year-old operator lost the tender to another one, and handed over the system to the new operator as of June 1. Since the transfer, users faced problems in fare collection or topping-up their cards, as a result of which there were delays in services and crowds in stations.

Commuters also had to re-introduce their cards to the system, which are available only in few locations. Since then the city's public transport has been partially free of charge, however this may come to an end, as the municipality had to re-introduce paper tickets after 25 years to collect fares and to prevent further financial loss.

As of Thursday, commuters that have not introduced their cards to the system must use transport services with paper tickets that can be obtained in stations and drivers. However, this method has also caused delays for buses, while the practice is being criticized for de facto ending the city's landmark rule of unlimited use of public transport for 90 minutes with single fare, although paper tickets were introduced slightly cheaper than electronic fares.

Bilal Doğan, deputy chair of AK Party group in municipal council, criticized the municipality for the problems in system transfer, noting that public loss has exceeded millions of Turkish liras.

"Trying to solve the citizens' unjust treatment with paper tickets is the symbol for lack of systemic work, lack of service," Doğan said.