Landmark trial looks to end violence against women in Turkey 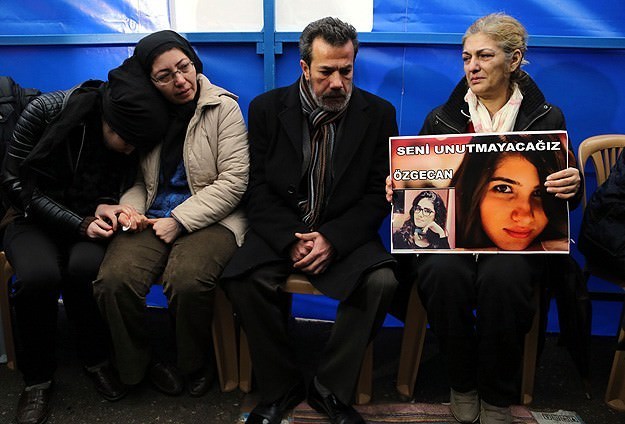 Three men detained in connection with the killing of a young woman in southern Turkey in February will appear in court on Friday. The trio, which have been charged over the death of 21-year-old Ozgecan Aslan, face a possible sentence of life imprisonment.

Aslan, a university student, was killed while apparently resisting a sexual assault in a minibus in the southern province of Mersin on Feb. 13 this year. Her charred body was found two days after she was reported missing. The case of the murdered student rocked Turkey, sparking a national debate on violence against women. The tragedy also has put the spotlight on the controversial use of 'extenuating circumstances' in sentencing cases of violence against women.

Gozde Salur, 21, from the western province of Izmir, launched an online petition right after Aslan's brutal murder asking parliament to amend legislation to prevent judges using provisions of 'good conduct' and 'unjust provocation' in the Turkish Penal Code to give lower jail terms for those found guilty of attacking women.

The campaign has attracted more than one million supporters. Kemal Kilicdaroglu, chairman of the main opposition Republican People's Party and the pro-Kurdish Peoples' Democratic Party have promised to reform these laws, the campaign's website claims.

"We request from you to promise that you are going to end such unjust practices. Let's abolish this injustice and name it 'Ozgecan's Law'," the petition says, calling for support from Turkish political leaders, including Prime Minister Ahmet Davutoglu.

Salur told local media in March that Aslan's brutal murder caused her to launch the petition at www.change.org, attracting more than 700,000 supporters within two days.

Now over 1.1 million people have signed the petition, making it the biggest virtual campaign in Turkey.

Huriye Karabacak, a lawyer and an activist at the Ankara-based Foundation for Women's Solidarity, says these provisions are a general rule to lessen punishment, not special clauses specifically to reduce penalties for violence against women.

Yet "if the victim is a woman, these clauses are widely introduced," Karabacak claims.

Funda Ekin, a lawyer, said the trial judge did not excuse Nevin Yildirim, who beheaded a man whom she accused of sexual assault, for "good conduct and unjust provocation" although Yildirim had not caused trouble during proceedings. Yildirim was given a life sentence in March.

"Although she said she regretted [the killing], the judge did not use extenuating circumstances," Ekin says, adding that such behaviors show a "male mentality" in the judiciary.

Karabacak said that, for example, if an accused assailant appears in suit, does not cause trouble during court proceedings and shows remorse, he could benefit from the 'good conduct' clause.

Furthermore, if he can show that the victim 'provoked' him, his punishment could be lowered further, she continued.

Women's dress and presence outside during nighttime are sometimes described as 'provocative' and thus used to lessen punishment against those found guilty of attacking females.

"An attacker's sentence could be lowered to 12 years of jail instead of an aggravated life sentence," Karabacak tells Anadolu Agency.

Karabacak said judges rule whether an attacker can benefit from such mitigating circumstances, adding that it is more important to raise awareness among the judiciary instead of enacting a particular law.

President Recep Tayyip Erdogan has also cautioned against the use of such penal clauses.

"When making laws, we mind certain sensitiveness. But if those have not been followed by police, prosecutors and judges, that means things are not going as we wish," he said in March while addressing a group of women on International Women's Day in Istanbul.

Ekin said it is out of question that the judge presiding Aslan's case could use extenuating circumstances to lessen jail terms in the event of a guilty verdict "because Aslan's tragedy was a wakeup call."

"People have begun to question the use of mitigating circumstances in cases of violence against women," she added.

Salur, the force behind the online campaign, says Ozgecan Aslan has become a symbol of violence against women in Turkey, adding that the case could be a landmark in ending extenuating circumstances benefiting mainly male assailers.
Last Update: Jun 12, 2015 2:18 am
RELATED TOPICS