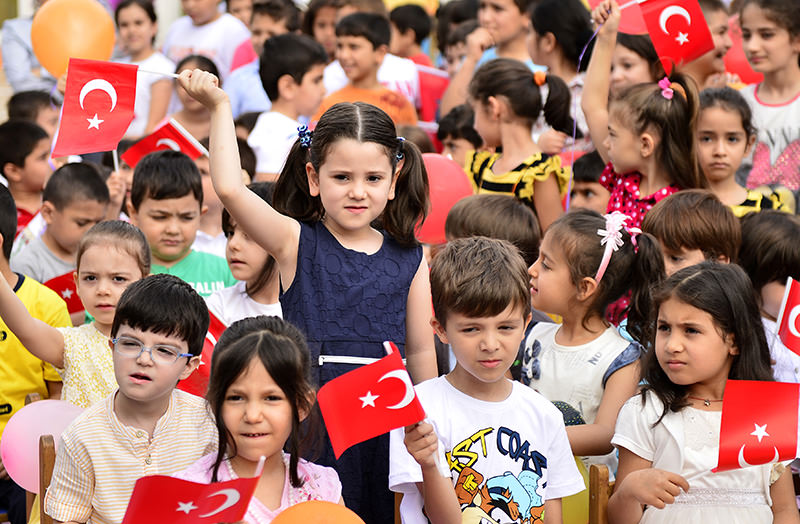 | AA Photo
by Daily Sabah Jun 12, 2015 12:00 am
More than 17 million students attending Turkey's grade and high schools celebrated the end of second semester on Friday, which marked the start of a three-month long summer break. Students across the country also received their report cards in traditional celebratory ceremonies.

Although students cheer the respite from classes, high school students will have to sit for exams for one more week, as the second round of university admissions exams, which began on Saturday, will continue throughout the next week.

For others with low grades, the end of the second semester means a dressing-down by parents. Especially in families with a history of domestic violence, the fear of being beaten at the hands of violent parents pushes some students to suicide. Psychiatrists warn parents against the strict punishment of children over poor grades. They urge a balanced approach toward report cards, neither rewarding nor punishing too much for high and low grades. They also suggest spending more time with children during the summer break.

High school admission exams are not the only recent major change to the Turkish educational system. The country's ban on dershane (cram schools) will go into effect in September. Those schools have been ordered to be converted into private high schools or shut down by September 2015 under a government plan. The dershane system emerged in the 1970s as a result of the problematic educational system, but turned into a lucrative source of income for many. The schools offer a strict study regime for students seeking high points for university entrance exams and charge high fees for weekend courses to high school students. The government decided to shut down the cram schools in favor of free courses for students provided by the state.

The summer break for millions of students is also welcomed by residents of Turkey's largest city, Istanbul. However, adults have a very different reason to celebrate the end of semester: Some relief to the city's chronic traffic problem. About 17,000 school buses take to the streets every morning and afternoon in the city, adding to the already frustrating traffic snarls in the city. School buses, or rather minibuses, pose a challenge to motorists both in the morning and afternoon rush hours and afterward, as they generally park along the lanes and sidewalks near the schools before taking students home.
Last Update: Jun 12, 2015 11:58 pm
RELATED TOPICS