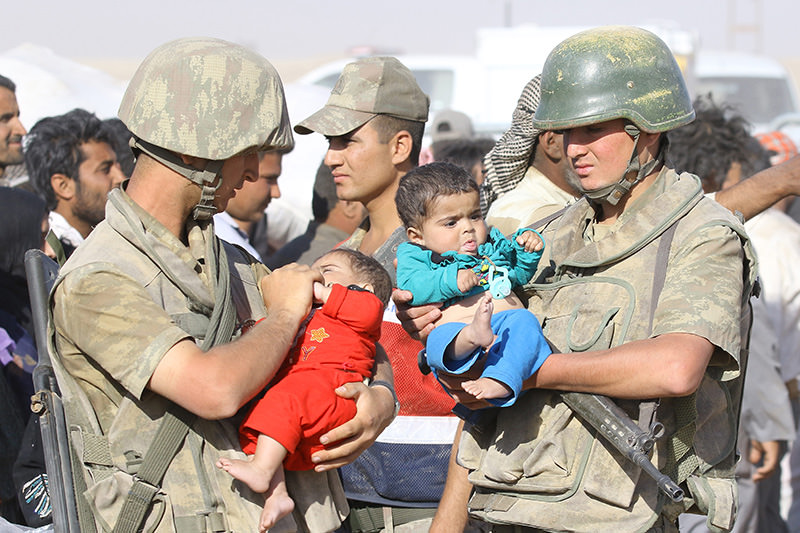 | AA Photo
by Compiled from Wire Services Jun 14, 2015 12:00 am
Turkey on Sunday began accepting Syrian refugees fleeing the battle between Kurds and Islamic State of Iraq and al-Sham (ISIS) extremists from the Syrian border town of Tal Abyad onto its territory.

Dozens of Syrian refugees, many carrying sacks of possessions, started passing through the Akçakale border gate onto Turkish territory as thousands more awaited their turn to cross to the other side.

Local officials in Akçakale said earlier that permission had been received from Ankara to allow the refugees to enter Turkey.

The decision came as Kurdish forces advanced on Tal Abyad, which is controlled by ISIS group who have captured swathes of Syria and Iraq.

A delay occured which Turkish television said was due to the ISIS extremists impeding the refugees from crossing onto the other side of the border.

Amid chaotic scenes, some Syrians managed to push their way through the border fences away from the actual Akçakale border gate to cross illegally into Turkey.

In the early evening, the Turkish authorities opened the Akçakale border gate itself and the refugees began to enter in an orderly fashion.
Many had relatives already waiting for them on the other side.

Under an "open-door" policy championed by President Recep Tayyip Erdoğan, Turkey has taken in almost two millions Syrian refugees since the conflict in Syria erupted in 2011.

The Turkish government has over recent months expressed increasing bitterness that it has been left to shoulder the burden of refugees while the West stands by.

The government said in April it has spent almost $5.5 billion (4.8 billion euros) to provide for Syrian refugees.

Before the closure of the border last week, Turkey had taken in over 13,500 Syrian refugees escaping the fighting for Tal Abyad, officials said.
Turkey also welcomed several thousand migrants during a similar conflict between ISIS and Kurdish fighters around the Syrian town of Kobane last September.