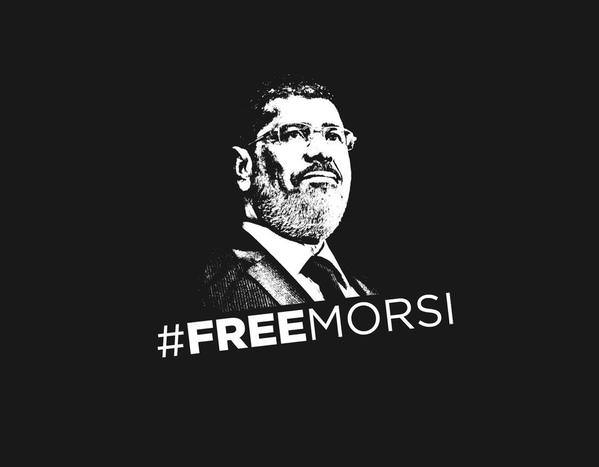 | Photo taken from social media
by Daily Sabah Jun 14, 2015 12:00 am
Initiated by journalists, Turkey has recently started a signature campaign, calling on Egypt to release the country's first democratically elected president, Mohammed Morsi, and several Muslim Brotherhood members who were sentenced to death penalty following removal of Morsi's from presidency by a coalition led by the Egyptian army chief General Abdel Fattah el-Sissi.

Launched by the name "FreeMorsi" on the web site www.freemorsi.org, the campaign has already collected hundreds of signatures from all around Turkey, but it still needs many other "supporters." The campaign is an effort designed to raise awareness among the public, calling for global action.

Released in three different languages (English, Arabic, Turkish), the campaign compares Morsi to other freedom fighters such as Gandhi, Martin Luther King and Mandela, and says Morsi "fought for freedom, justice and humanity".

The court referred 122 out 166 defendants, including Morsi to the grand mufti, the most senior religious authority in the country, for a consultative review as required by Egyptian law. The Egyptian court received the mufti's recommendations on whether a death sentence was warranted, which are not binding on the court (and yet to be made public), and is expected to give its final verdict regarding the case on June 16.

Morsi can appeal the verdict. He has said the court is not legitimate, describing legal proceedings against him as part of a coup by Sissi in 2013.