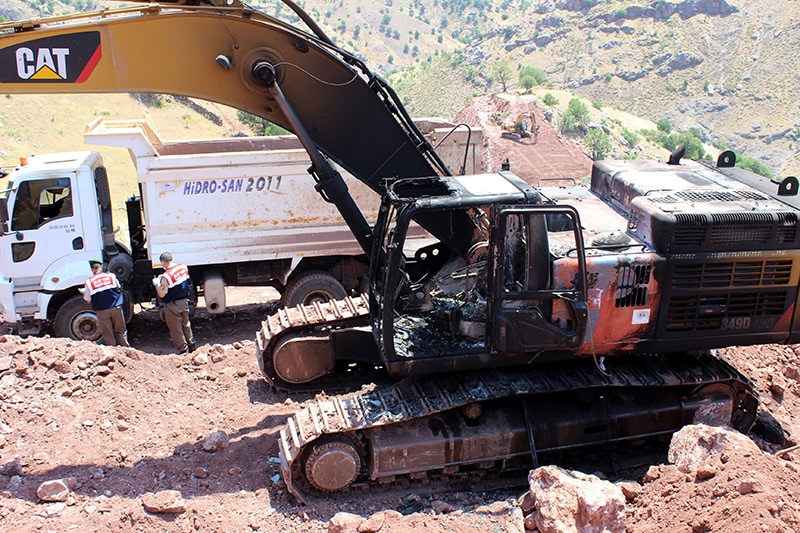 A group of militants from the PKK terrorist organization raided a dam construction site in Adıyaman province in the southeast early on Monday and torched two trucks and three bulldozers at the site.

Six militants arrived at the construction site of the Koçali dam in the province's Çelikhan district in the early hours of Monday. They fled the scene after setting the vehicles on fire.

Koçali Dam, whose construction was started more than two months ago, was the latest target of PKK that occasionally raids such sites.

In June 2014, the PKK destroyed 12 trucks and bulldozers at the construction site of a hydroelectric dam in the eastern province of Bingöl and threatened workers to stop working at the site.

The PKK largely ceased its bloody attacks targeting civilians and security forces after Ankara launched the reconciliation process, a series of steps to end the PKK's brutal campaign of terrorism. The reconciliation process, during which the PKK announced it would leave its mountain hideouts in the southeast, saw relative peace in the predominantly Kurdish region where the militants mainly draw support. As the government speeds up infrastructure projects such as dams that can boost dormant agricultural resources, the PKK steps up its attacks against these projects in response – apparently motivated to demonstrate that the group has not lost its domination over the region it gained through intimidation, killings and abductions, according to some experts.

The most blatant example of the PKK's intimidation campaign was 99 attacks on the construction site of an airport in the southeastern province of Hakkari. The airport's construction fell two years behind schedule, but opened last month after its construction was completed despite the PKK's threats to contractors and vandalism of heavy equipment used in the construction.
Last Update: Jun 15, 2015 4:23 pm
RELATED TOPICS