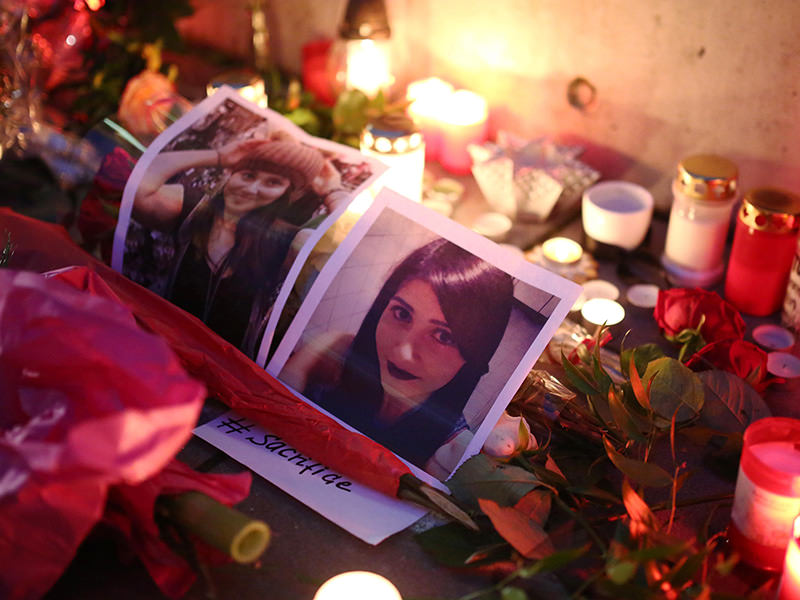 | AA Photo
by Daily Sabah with Wires Jun 16, 2015 12:00 am
An 18-year-old suspect was sentenced to three years in prison for causing the death of Tuğçe Albayrak, a young German-Turkish woman hailed as a heroine in Germany for confronting the suspect and his friends.

The verdict by the court in the German city of Darmstadt for Sanel Masovic, a German national of Serbian origin, came months after Masovic engaged in an argument with Albayrak in the parking lot of a fast-food restaurant in Offenbach. The defendant admitted he hit Albayrak who fell on the ground and died after days in a coma from head injuries on her 23rd birthday in November 2014. The argument had come after Albayrak intervened between Masovic and his friends harassing two German girls in the restaurant. Albayrak won posthumous praise after her act and bravery as hundreds gathered for her funeral and for vigils in her memory.

The defendant, who had past convictions for assault was handed down the light sentence under juvenile law. In his opening and closing statements at the hearings, he expressed his apologies to the family of Albayrak and said he was sorry. His lawyers had accused the judge of prejudice against Masovic because of his past convictions. Lawyers had asked for a one-year suspended sentence. The sentence is subject to appeal. He would face a tougher sentence if he had been charged with manslaughter rather than causing bodily harm resulting in death.

The young woman's death has also sparked a debate in Germany regarding acts of courage. An article in the Frankfurter Allgemeine said that Albayrak's death may cause people to not attempt interventions when they witness harassment. A columnist at Allgemeine Zeitung Mainz wrote that "people should not play the hero" and questioned whether it was necessary to endanger oneself while not remaining indifferent to such harassment. A columnist for Welt said the German public should be ashamed for not helping a woman who confronted a violent teenager and called for harsher sentences for perpetrators of such crimes. Columns in other media outlets echoed these sentiments and point to the dilemma of confronting the harassment of others or avoiding not being attacked.

German President Joachim Gauck wrote a letter of condolence to the young woman's family and said: "Tuğçe showed exemplary bravery and civil courage and came to the aid of a victim of violence when other people looked the other way."
Last Update: Jun 16, 2015 4:46 pm
RELATED TOPICS