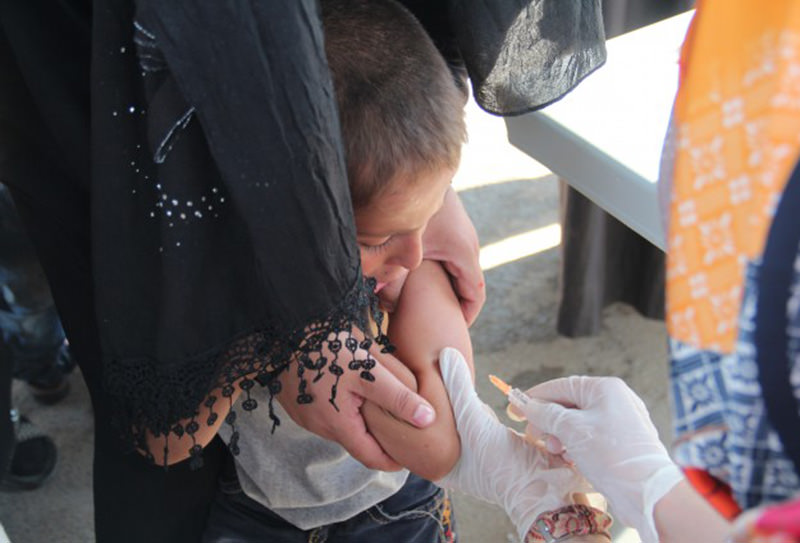 Yaşar Şimşek, public health director of the southeastern Şanliurfa province, told Anadolu Agency on Monday that health care within the Akçakale customs area had been provided to refugees who fled fighting and bombings in the city of Tal Abyad.

Over the past two weeks, the People's Protection Units (YPG) militia, has been carrying out operations with the help of U.S.-led coalition airstrikes in the northeastern regions of Tal Abyad and al-Hasakah to push back the self-proclaimed Islamic State of Iraq and al-Sham (ISIS) militants.

Şimşek said the number of the vaccinated Syrian refugee children of 15 years old and under had reached 6,000.

"Measles and polio were both serious contagious diseases for Syria, as we knew of past cases in the country. We have taken preventive measures against them," he added.

The health director stated that a health team of 20 people in the border region have been offering ambulatory care service, namely for women and the elderly.

Şimşek further noted that the refugees could get free service from family health centers in Akçakale district for 24 hours.

Since the operations began two weeks ago, almost 15,000 civilians from adjacent villages and towns -- most of whom are Syrian Arabs or Turkmens rather than Kurds -- have crossed the border into Şanlıurfa, official sources told Anadolu Agency last Friday.

Later, ISIS militants began preventing civilians from crossing into Turkey, forcibly ordering them to move back to Tal Abyad.

Turkish officials confirmed earlier Monday that another 2,800 Syrian refugees fleeing fighting between Kurdish forces and ISIS militants had crossed into Turkey through the southern Akçakale border gate since the border was opened Sunday afternoon.
Last Update: Jun 16, 2015 11:02 am
RELATED TOPICS