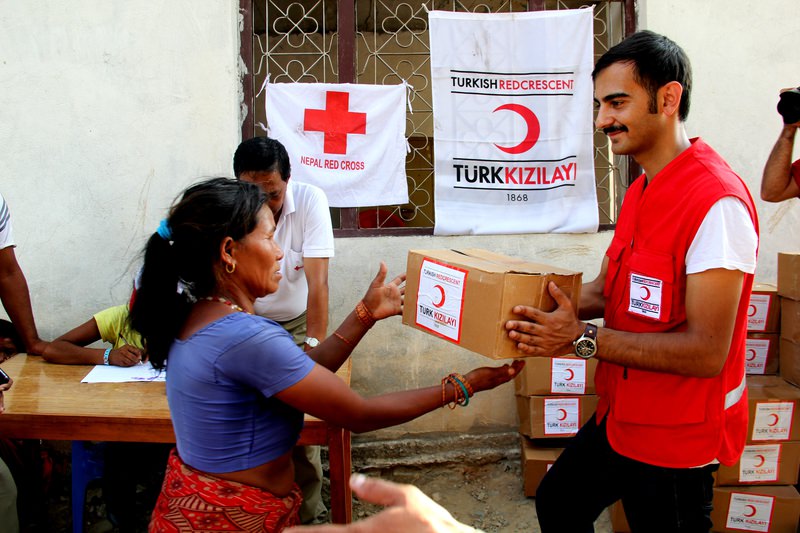 by Daily Sabah with AA Jun 17, 2015 12:00 am
Turkish Red Crescent has said on Wednesday that it is doing its best to help provide the earthquake victims in Nepal with tarpaulins, food, water and hygiene kits and will continue its relief activities.

The Turkish aid agency has provided around 4,000 tarpaulins to the victims in the capital city Kathmandu, nearby towns and several places close to the Himalaya mountain range since April 25, the first day of the earthquake.

The Red Crescent also delivered food packages, blankets and drinking water to the victims in the country.

Turkish Red Crescent Nepal Delegation Chair Mücahit Salih Duran said: "Now we are in Sindhupalchok district. This is the epicenter of the earthquake. Many people died and got wounded here; moreover there are lots of missing people. Aftershocks are happening in the town. Due to the earthquake the people are in panic and they have to shelter outside. We are supporting the victims by giving them tarps, food, water and hygiene kits".

Duran said that food packages were delivered in coordination with Nepalese Red Cross to the most affected areas.

He also added that Turkish Red Crescent distributed hygiene kits to a village of Ramechhap district, located some 180 kilometers east of Kathmandu.

In addition to the Turkish Red Crescent's aid, Turkey's emergency agency AFAD had also sent support to quake-hit Nepal and had provided the eathquake victims with a four-ton medical and food supply package in May.

The April 25 earthquake hit Nepal with a magnitude of 7.8 and killed more than 8,150 people, while injuring up to 18,000 others. It wasthe worst natural disaster to strike Nepal since the 1934 Nepal–Bihar earthquake which killed around 12,000 people.

In a matter of weeks, a second earthquake hit Nepal on May 12, killing more than 200 people and leaving 2,500 people injured.