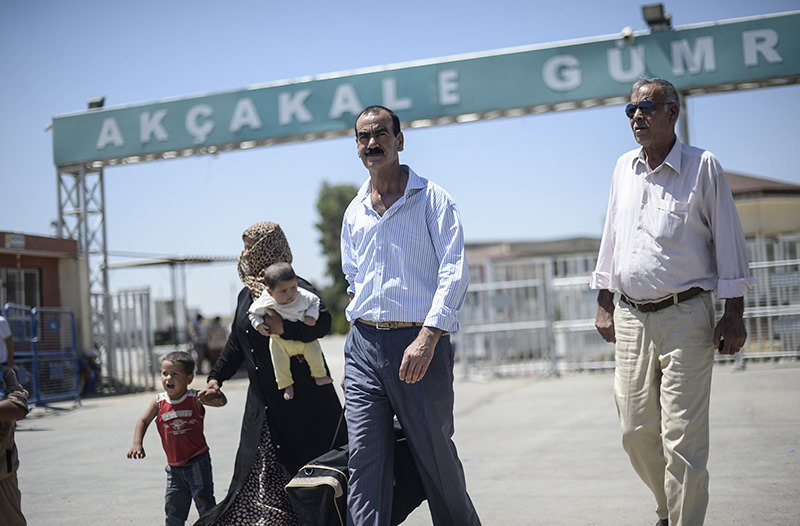 Syrian refugees walk along the road that leads to the Aku00e7akale border gate as they wait to return to their home in the northern Syrian town of Tel Abyad, in u015eanlu0131urfa province, on June 18, 2015 (AFP Photo)
by Anadolu Agency Jun 18, 2015 12:00 am
"There is no electricity, no water and no life there. I will wait for a while before returning to my town."

So says fifty-five-year-old Syrian man Halil Mohammed, a farmer, who entered Turkey along with his 12 children five days ago.

Mohammed is just one of the thousands of people who fled the battle which raged in his home city of Tal Abyad, just across the nearby border.
Tal Abyad, which has seen fierce fighting between ISIS and Syrian-Kurdish fighters in the last two weeks, is now under Kurdish control.

As the conflict stopped there Tuesday, hundreds of Syrians crossed back into their country through Turkey's Akçakale border on Wednesday, many carrying their belongings on their shoulders.

But many are divided about whether to stay or go, given the uncertain future facing their country.

"I do not trust in the peace there; conflict could restart anytime," says Mohammed while standing with a friend near the border to follow the latest movements.

"I would like to stay here during Ramadan and have one peaceful month."

Fifty-year-old Ibrahim al-Hardan, a technician, is braver than Mohammed. Hardan crossed the Akçakale border on Wednesday, along with his eight children, to go home after staying in a house belonging to his relatives for three days.

"We were always hearing the sounds of fighting there. It was very difficult. Because I was worrying about my family and children, we came here."

Hardan and his family did not want to be a burden to their relatives: "We are returning back right now but if we see the situation is getting worse, we will come back [to Turkey]."

The border crossing was busy on Wednesday with Syrians returning.

However, Mohammed, like many others, preferred to stay in Akçakale.

His friend Ahmed al-Mahmood, who came to Turkey over two years ago, is hosting Mohammed and his 14-strong family.

They did not want any photos or videos to be taken for security reasons but they say that 28 people are living in the same apartment.

"Of course, I will help my friends in this kind of situation. Wouldn't you do the same thing if your friend ended up in a hard situation?" Mahmood asks.

Talaf Ergüven, who runs a grocery store just 100 meters away from the Akçakale border, also hosts a Syrian family that took refuge three days ago.

"I do not even know them. As I see their situation is hard and they are needy people, I gave them a room belonging to me," Ergüven says.

"I am not a wealthy person. I am also barely feeding my family but I feel like it is a duty for me to share with them even I have only one piece of bread."

A 22-year-old woman, who did not want to disclose her name, is living in Ergüven's room along with her 18-year-old brother and her mother.

"I both thank the Turkish government and the hospitable people here for helping and accepting us. We are very grateful to them," she says.

"If the Turkish government did not open the doors to us, we would have died in Syria," says 48-year-old Ali Berho, a civil servant.

"No other country has done the same thing for us."

Turkey shares a 900-kilometer (560-mile) border with Syria and has sheltered more than 1.7 million Syrians, according to the UN, with more people arriving because of ongoing bloodshed in their war-torn country.

According to government figures, Turkey has spent more than $6 billion so far for refugees while the international community's help has amounted to $300 million.