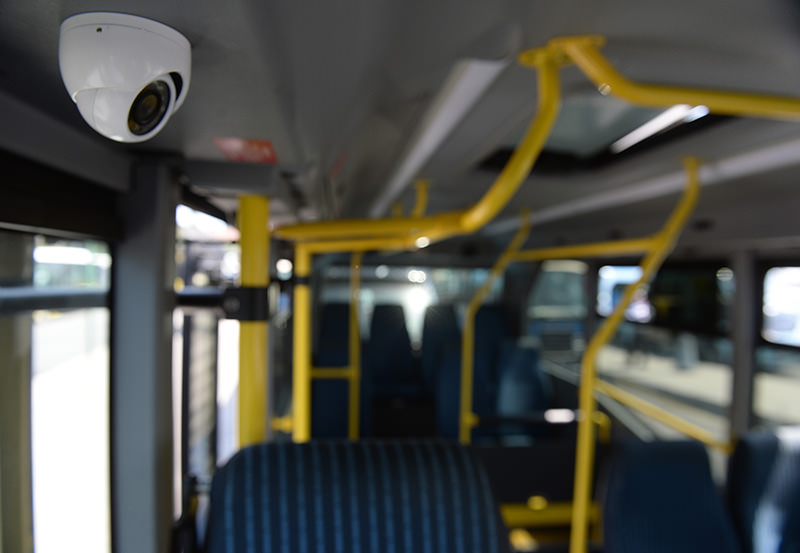 | AA Photo
by Daily Sabah with AA Jun 18, 2015 12:00 am
In a move to deter crimes and safer travel for millions, the Istanbul municipality has ordered all buses and minibuses used in public transit to be equipped with security cameras and global positioning systems (GPS). Privately owned mass transit buses and minibuses will have a deadline by the end of June to install the cameras and GPS's or their licenses will be revoked.

Apart from recording the conduct of drivers, the installation of cameras aims to detect cases of sexual harassment of female passengers, which is prevalent on packed buses.

Ramis Yılmaz, head of an association of minibus operators on Istanbul's Asian side, said the installation of cameras and GPS's was essential for the security of passengers, drivers and the vehicles in case of a crime, whether sexual harassment, theft or an act of violence. Yılmaz said that cameras would prevent new cases of murder like Özgecan Aslan. Aslan, a young university student, was murdered after an alleged rape attempt by the driver of a minibus she boarded in southern Turkey in February.

The safety of minibuses, a popular means of transit, or rather, the safety of passengers who have to travel in an empty minibus except for the driver, especially at night, was scrutinized after the murder. Media reports had earlier cited that panic buttons would be installed in public transit, though no plans have been announced in this regard.

GPS systems will enable monitoring of the route of minibuses especially when they deviate from their pre-defined routes. Aslan was killed on a secluded road the minibus driver took her to, instead of the minibus's regular route.

Damla Yıldırım, a regular passenger, said she usually avoids boarding minibuses "for fear of her safety," but the installation of cameras may help alleviating her concern. "It is especially good against the harassment of women," she said.

Traveling on a bus or minibus at night presents a challenge to women, who shared their stories of traveling after dark, particularly in less populated parts of cities, on social media following the murder of Aslan, relating to harassment by drivers or other passengers.
Last Update: Jun 18, 2015 3:31 pm
RELATED TOPICS