Turkish hospitality toward refugees setting an example for the rest, UN commissioner says 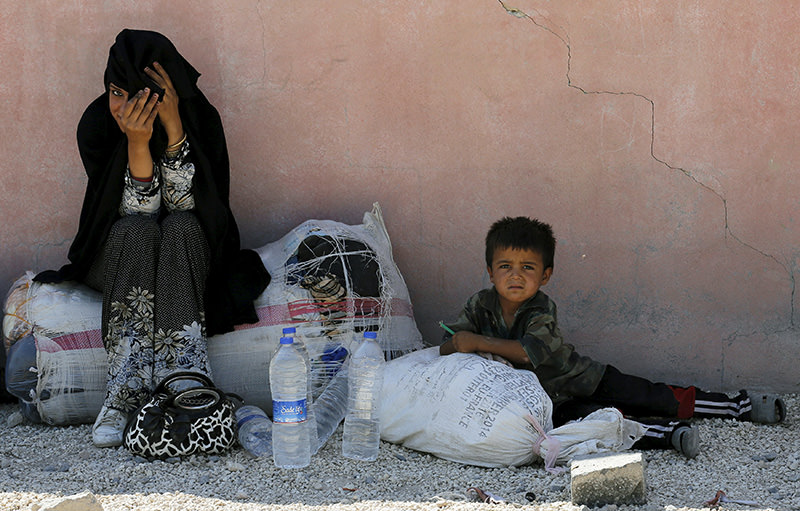 At a time when many countries are trying to erect new walls and are shutting down borders to those seeking help, Turkey’s open door policy toward Syrians, Iraqis and Afghans is setting an example others need to follow, U.N.’s High Commissioner for Refugees Antonio Guterres said

Turkey shelters the largest number of refugees in the world, but gets very little support from other countries, U.N. High Commissioner for Refugees Antonio Guterres said at a press conference in Istanbul. Guterres was speaking on Thursday amid the ongoing crisis on the country's southern border, with fighting between Syrian Kurdish forces and the self-proclaimed Islamic State of Iraq and al-Sham (ISIS) extremists forcing thousands of desperate civilians to seek safety in Turkey. "We estimate more than 2 million refugees are in Turkey today. Turkey very generously opened its borders to such a large number of Syrians, Iraqis and Afghans," Guterres said during a launch of the U.N. refugee agency's 2014 Global Trends report. Gutteres said Turkey in 2014 had accepted 11 percent of all refugees in the world. "That has a special meaning in a world where so many borders are closed or restricted and new walls are built," Guterres said.

He told reporters that the world had a universal responsibility to protect those who have fled their countries. "It is important that the European Union, like the Gulf countries, like other parts of the world, also open their borders," he said. He said Turkey's generosity should force other countries to follow the example it has set in the past few years.

"It is important that the European Union, like the Gulf countries, like other parts of the world, also open their borders," UNHCR chief said. He said Turkey's generosity has a special meaning in a world where "so many borders are closed or restricted and where new walls are being built or announced."

"This should force everyone to follow this example," he said. "It is not only [a responsibility] of Turkey, of Lebanon or of Jordan," he said, referring to the two other countries that have also taken in large numbers of Syrian refugees. "It is a global responsibility."
Turkey has pursued an open-door policy championed by President Recep Tayyip Erdoğan for Syrian refugees, which Ankara has continued even amid increasing social strains.

Turkey, which shares a 900-kilometer border with Syria, has 1,772,535 million Syrian refugees, according to the UNHCR, with more people coming in because of ongoing bloodshed in the war-torn country.

Over the past two weeks, over 20,000 Syrian refugees fleeing clashes in the Syrian city of Tal Abyad entered Turkey's Şanliurfa province through the Akçakale border crossing.

The report claims that Syria is "the world's biggest producer of both internally displaced people (7.6 million) and refugees (3.88 million) at the end of 2014."

The agency said that after Syria, Afghanistan with 2.59 million and Somalia with 1.1 million are the next biggest refugee-producing countries.

The UNHCR's report also showed worldwide displacement from wars, conflict and persecution was is at its highest level, reaching 59.5 million people at the end of 2014.

There were 51.2 million displaced people a year earlier and 37.5 million a decade ago.

The agency said the main reason for this dramatic increase is the Syrian civil war. "In 2014, an average of 42,500 people became refugees, asylum seekers or internally-displaced every day," the agency said, adding: "Were this the population of a country, it would be the world's 24th biggest." This new Global Trends report disclosed that 13.9 million people became displaced in 2014 alone: "Alarmingly, over half the world's refugees are children," it highlighted.

Guterres stressed that humanitarian organizations are no longer able to cope. "We no longer have the resources to respond to such a dramatic increase in humanitarian need in the world because a new conflict emerges every month," he said. He added that his agency faced a reduced budget, making it even more difficult to address the crisis. "We are far from being able to respond to the dramatic needs of the people we care for," he said. In the face of these difficulties, refugees usually try to flee to countries where they see promise for a better life.

In contrast to perceptions that refugees from African or Middle Eastern countries flee to the developed world, Guterres revealed that 86 percent of refugees are in the developing world.

"Discussions we sometimes witness about refugees moving in large numbers to richer parts of the world [are] something that does not correspond to the global reality we face.

"The bulk of those that flee are fleeing to countries that have low or middle incomes," Guterres said.