Bittersweet Ramadan joy of Syrian refugees on the Turkish border 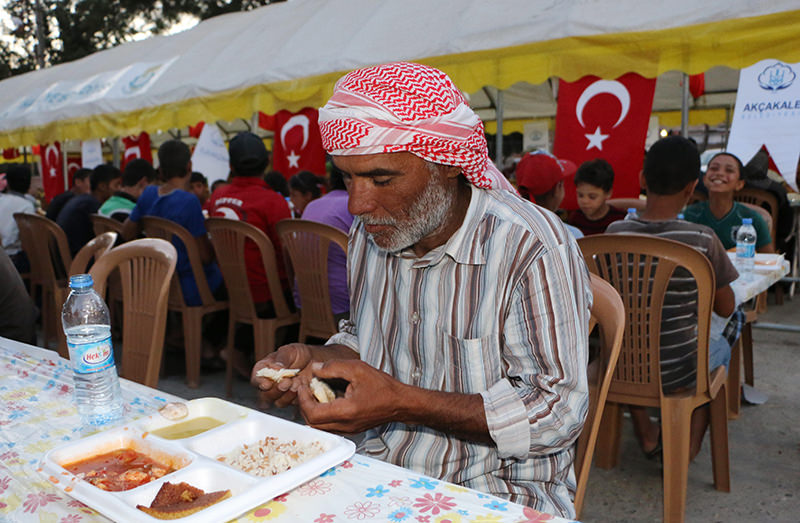 Syrian man breaks his fast at an iftar dinner hosted by Aku00e7akale Municipality (AA Photo)
by Anadolu Agency Jun 19, 2015 12:00 am
With the azan – the Islamic call to prayer – finally ringing out, everybody went into their tents to break their 17-hour fast on the first day of Ramadan on Thursday. For these Muslims, however, their iftar meal will be held on foreign soil. Thousands of Syrian refugees in southeastern Turkey are welcoming Ramadan in emergency accommodation centers for the fifth time.

A special time of year for many Muslims, this Ramadan is bittersweet as these people remain separated from their homeland after the devastating civil war that erupted in March 2011 and has claimed more than 211,000 lives so far.

Anadolu Agency (AA) witnessed preparations for the iftar dinners at the Süleyman Şah Accommodation Facility in the Akcakale district of southeastern Turkey's Şanlıurfa province, and attended a fast-breaking dinner with a Syrian family in their tent.

The busy hours for Ramadan in Süleyman Şah start after 5:00 p.m. Women speed up their cooking and men and children pour along markets established in the center. Soups, salads, cold beverages, pita bread and the traditional Ramadan fruit of dates are essential parts of many people's iftar menu. Depending on the people, however, the menu changes.

Sevsen Jerat, 35, is a housewife who has been staying at the center for around three years. Along with her four children and her brother, she prepared four types of meals, which included lentil soup, rice with chicken, salad and "kibbeh" – a Levantine dish made of bulgur and minced onions.

Jerat, a mother of four children, was happy to welcome Ramadan in a secure atmosphere but was also sad because she is separated from her family. "At our previous iftar dinners in Syria, we got together with all of my family members around a table and broke our fast together. My mother used to host us on the first day of Ramadan," Jerat said, tearfully recalling her memories. "Now, I am not together with my mother, sisters or my husband." Jerat left Damascus for Turkey because of the increasingly dangerous environment but her sisters and mother still live in Deir ez-Zor, while her husband, a firefighter, works in Germany.

Syrians at the center are thankful and appreciative of Turkey for providing them with a livable atmosphere, but many still suffer from traumatic memories that prevent them from living a happy life.

"My brother was killed during a bombing [in Deir ez-Zor.] My nephew was also killed. It is not possible to erase them easily from our memories," said Halsa Tallah, 53, a housewife, marking her third Ramadan in Turkey. "The thing that we've missed most is to be in our homeland and in our homes during Ramadan. Except that, thank God, we are doing ok here."

Halil al-Muslim, who has been living in the camp for around a year after fleeing his home in Deir ez-Zor, marked Ramadan in the center for the first time.

On the first day of the holy month, Muslim broke his fast at a mass iftar dinner attended by 1,000 people organized by the Prime Ministry Disaster and Emergency Management Authority (AFAD). Half an hour before the azan was announced, many people formed lines to be able to attend the event, which will be held during every evening this month.

"Our aim is to make Syrians feel like they are at home," said Mehmet Dikeç, a Süleyman Şah official.

And it seems they have reached their aim. "Even just this moment is enough to make me feel better than the days I lived through during the last four years in Syria. What else can I say?" Muslim said.