Life goes on for Syrians in Turkish tent city 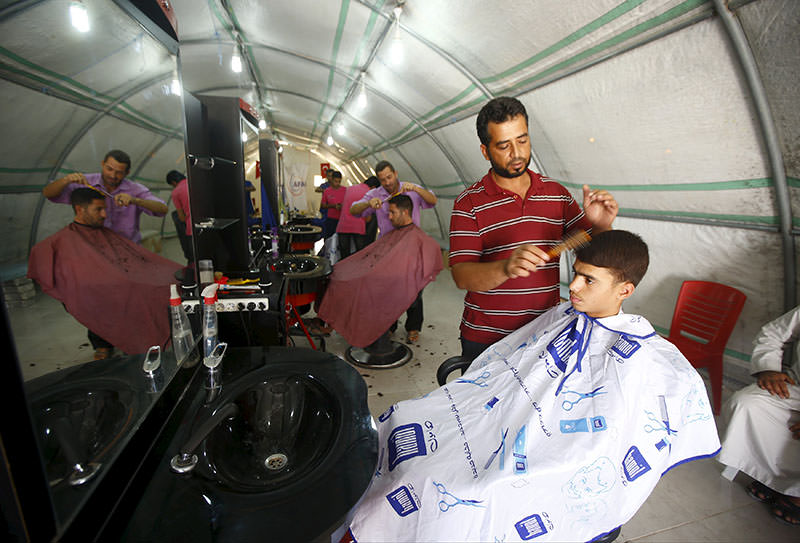 A hairdresser cuts the hair of a customer at Suleymansah refugee camp in Akcakale in Sanliurfa province, Turkey, June 11, 2015 (Reuters Photo)
by Anadolu Agency Jun 20, 2015 12:00 am
Over 10 hairdressers work at the same time in the full-fledged male barber shop in the southeastern Turkish province of Şanlıurfa.

They have everything they need – from hairdresser chairs to electric shavers, from hair dryers to scissors and mirrors. It is no different from any other barber shop in the middle of a city. Except this one is in a tent. And the employees are all Syrians who have fled a war.

The shop is located in the Süleyman Şah Accommodation Facility, which was established in the Akçakale district by the Prime Ministry in 2012 to offer decent living quarters for Syrians.

It is but one of the 5,200 tents that make up the 10 neighborhoods of the Süleyman Şah Accommodation Facility. And it simmers with activity at every hour.

Employees - some cutting hair, some applying a shave – say it is more than a workplace for them. Here, they can forget everything bad they have experienced in their war-torn country.

The devastating civil war in Syria, which began in March 2011, has claimed more than 211,000 lives so far and seems to have no end in sight.

"Here is a very clean, hygienic, nice and roomy place. We do not have any electricity problem. We have air conditioners, hot water. We are comfortably working here without any problems," says 37-year-old Abdulrazzak Mohammed, who has been working in the shop as a chief hairdresser for around three years.

Mohammed, a father of five children, has been suffering from a back injury for over three years after being hit by a piece of shrapnel in his hometown Idlib.

"Thanks to this place, we do not sit in the tents idly. We can forget our bad memories while working," he adds. "They also allow disabled people to work here."

Another hairdresser Musab Yasin, 31, who has been in the barber shop for two years, agrees: "The most important thing is this place helps us feed our family and forget our problems."

A father of three boys, Yasin also feeds his brother's two children since he was killed in Hama, in western Syria, two years ago.

Fifty-two year-old energetic Jamila Salih has been working for three years in the Facility, not as a hairdresser but as a chief tailor and designer.

Along with 19 female employees, she designs and sews new clothes in a tailor shop in the tent city.

"We are preparing clothes right now for children to give them on the Eid al-Fitr, [a festival of Ramadan]," Salih says.

"Living in a tent and doing nothing is boring. When I come here, I feel relieved. When I don't work even for one day, I feel like I did not work for a one year and I yearn to come here."

The facility is one of the biggest fully equipped centers opened for Syrians across Turkey. Hosting nearly 30,000 people from almost every city in Syria, it functions as a real district.

There are primary and secondary schools, where a total of 8,000 students can study, as well as a kindergarten that can welcome up to 1,200 children.

One can also come across 20 small mosques (masjid) in which 100 religious employees – 40 of them women – work.

The mobile hospital complex boasts a capacity of 50-beds. And the recreational facility, in which theatre shows, exhibitions, wedding organizations and sport activities are held, provides much-needed distractions to the Syrians.

There are also six supermarkets and a bazaar area where several Syrian peddlers sell desserts, kitchenware, perfumes and traditional bread in the streets. Others run a grocery store, which they established in a part of their tents.

The tent city also has a total of 54 vehicles, including ambulances, fire trucks and tractors, available.

The Turkish government also gives every individual including babies in the facility 80 Turkish liras (around $30) monthly, which amounts to around 600 Turkish liras [around $230] for a seven-person family.

"This is a very important place for me," says the tailor and designer Jamila. "If things return to normal in our country one day, I will be the last person who leaves here. I love it here that much."
There are 25 camps hosting Syrians in Turkey, 16 of which are container cities. The remaining nine are tent cities.

Turkey shares a 900-kilometer border with Syria and has sheltered more than 1.7 million Syrians, according to the U.N., with more arriving because of ongoing bloodshed in the war-torn country.

According to government figures, the country has spent more than $6 billion so far for refugees while the international community's help has amounted to $300 million.
Last Update: Jun 21, 2015 3:56 pm
RELATED TOPICS