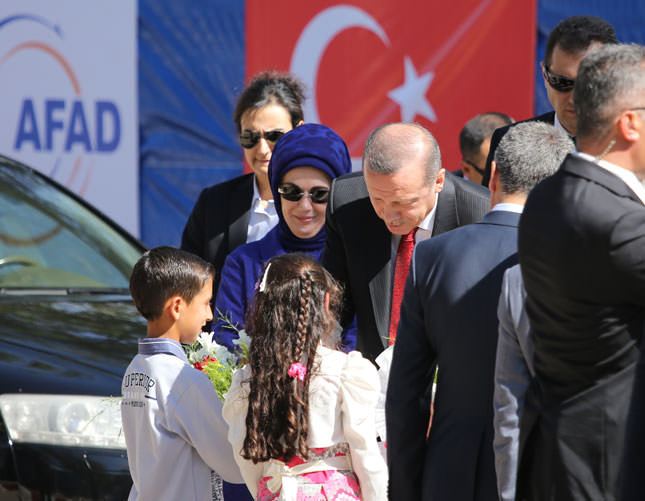 by Daily Sabah Jun 20, 2015 12:00 am
Turkey's President Recep Tayyip Erdoğan on Saturday warned against the YPG and said that the same mistakes are being repeated today.

Addressing refugees right before a fast-breaking (iftar) dinner, President Erdoğan said that the mistakes which were made in the past regarding the Assad regime in Syria and the self-proclaimed Islamic State of Iraq and al-Sham (ISIS) are being repeated today regarding the YPG.

The Turkish president highlighted that it is not possible for any solution contradicting the history, sociology and demography of the region to bring peace and tranquility in the region. "We work to find a solution which will not only guarantee the rights of a specific ethnic or religious group in the region, but rather everyone who lives there" he said, adding that forced ethnic and religious impositions would only lead to more violence and shedding of blood.

President Erdoğan has met U.N. High Commissioner for Refugees (UNHCR) Antonio Guterres in the southeastern province of Mardin on Saturday to discuss the on-goıng refugee crisis and possible solutions. President Erdoğan has also visited the refugee camps in the area in support of World Refugee Day.

UNHCR head Antonio Guterres has been in Turkey for the launch of a report on the situation of refugees around the world, which showed Turkey was the top refugee-hosting nation with 1.59 million Syrians at the end of 2014.

Currently, the country has nearly 2 million refugees, but their numbers are expected to swell with new clashes between Kurdish forces and the Islamic State of Iraq and al-Sham (ISIS) terrorist organization.

Turkey shelters the largest number of refugees in the world, but gets very little support from other countries, U.N. High Commissioner for Refugees Antonio Guterres said at a press conference in Istanbul.

Guterres was speaking on Thursday amid the ongoing crisis on the country's southern border, with fighting between Syrian Kurdish forces and the self-proclaimed Islamic State of Iraq and al-Sham (ISIS) extremists forcing thousands of desperate civilians to seek safety in Turkey.

"We estimate more than 2 million refugees are in Turkey today. Turkey very generously opened its borders to such a large number of Syrians, Iraqis and Afghans," Guterres said during a launch of the U.N. refugee agency's 2014 Global Trends report. Guterres said Turkey in 2014 had accepted 11 percent of all refugees in the world.

"That has a special meaning in a world where so many borders are closed or restricted and new walls are built," Guterres said.

He told reporters that the world had a universal responsibility to protect those who have fled their countries.

"It is important that the European Union, like the Gulf countries, like other parts of the world, also open their borders," he said.

He noted Turkey's generosity should force other countries to follow the example it has set in the past few years.

"It is important that the European Union, like the Gulf countries, like other parts of the world, also open their borders," UNHCR chief said.

He added that Turkey's generosity has a special meaning in a world where "so many borders are closed or restricted and where new walls are being built or announced."

"This should force everyone to follow this example," he said. "It is not only [a responsibility] of Turkey, of Lebanon or of Jordan," he said, referring to the two other countries that have also taken in large numbers of Syrian refugees. "It is a global responsibility."

There are 259,523 Syrians in 25 refugee camps in Turkey who fled the civil war in their country, according to the latest figures supplied by Turkish authorities.

Over the past two weeks over 20,000 Syrian refugees fleeing clashes in the Syrian city of Tal Abyad entered Turkey's Şanlıurfa province through the Akçakale border crossing.

The UNHCR report says that Syria is "the world's biggest producer of both internally displaced people (7.6 million) and refugees (3.88 million) at the end of 2014."

Turkey pursues an open-door policy for Syrian refugees but complains of the lack of assistance from the international community. Ankara often blames other countries for not shouldering the burden in caring for the refugees or simply not taking them in.

Despite the social and financial strain it faces with rising numbers of refugees, Turkey is not expected to shift its policy on Syrians, nor its treatment of them in the modern refugee camps that Jolie has praised in her earlier visits.