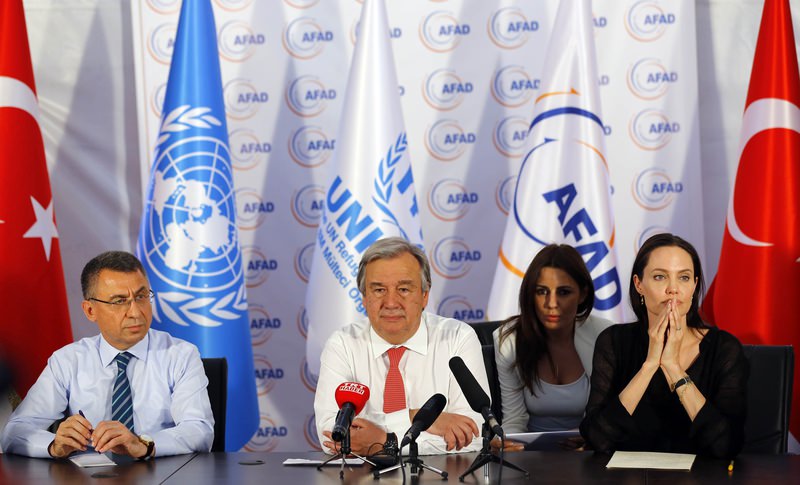 | AA Photo
by Daily Sabah with Agencies Jun 20, 2015 12:00 am
Turkey's contribution in hosting refugees fleeing conflict in the region has been praised by numerous actors including the U.N. High Commissioner on Refugees Antonio Guterres and U.N. High Commissioner for Refugees (UNHCR) Goodwill Ambassador Angelina Jolie during their visit to a refugee camp located in Southeastern Turkey on World Refugee Day.

Speaking at the World Refugee Day press conference on Saturday, Antonia Guterres UN High Commissioner on Refugees stated that "Turkey is a great example for other countries in a world where borders are becoming unpassable for refugees," adding that the UN Security Council is, 'unfortunately not functioning effectively,' and emphasized that Turkey has helped refugees with very little assistance from other countries.

Guterres also said that one of the important reasons for him today was to convey his gratitude to the Republic of Turkey, to the Turkish government and to the people of Turkey for the support that they have shown.

Stating that 'it is not enough that that only Turkey has opened its borders to refugees, to those in need' Guterres emphasized that all borders around the world should be opened to those in need of asylum.

Also speaking at the press conference, the special envoy for the United Nations with High Commissioner on Refugees, Angelina Jolie said in her speech that "Turkey has taken in more refugees than any other country in the world and has hosted more than 1,8 million displaced Iraqi and Syrian refugees within four years."

Hollywood superstar Angelina Jolie has thanked the Turkish people for their generosity, while attending the World Refugee Day program in Turkey's southeastern province of Mardin on Saturday.

Jolie met with Turkish President Recep Tayyip Erdoğan and stated that Turkey sets an example in terms of hosting and providing assistance to refugees. According to presidential sources, Jolie especially focused on women and child refugees and gave President Erdoğan a copy of the speech she made at the African Union Summit.

She pledged that she will raise awareness about the importance of visits made by senior officials to refugee camps, which she noted was significant.

Jolie visited a refugee camp in Mardin as part of her work as special envoy for the United Nations with High Commissioner on Refugees Antonio Guterres.

Jolie, reading from a prepared speech alongside United Nations High Commissioner on Refugees Antonio Guterres, told journalists that "never before have so many people been dispossessed or stripped of their human rights."

Jolie's visit is the latest in a series of visits to Turkey as part of her work as the UNHCR's special envoy. It is meant to bring attention to the plight of refugees, whose number has reached a record 60 million worldwide, according to the U.N.

As numbers increase, many countries are scrambling to find ways to close their doors to the new arrivals. Hungary recently announced plans to build a 4-meter (13-foot) high fence on the border with Serbia to stop the flow of migrants from Asia and Africa, and anti-immigrant sentiment has flared elsewhere in Europe.

"People are running out of places to run to," she said, emphasizing "the need to be open and tolerant to people ... who may not be able to return home."

Turkey now officially hosts the world's largest refugee community about 1.6 million, according the latest U.N. figures. As the war in neighboring Syria rages into its fifth year, the flow shows no sign of abating.

"We don't know how many more will be coming," said Fuat Oktay, the chief of Turkey's disaster and emergency agency (AFAD). "There's a huge risk that the number might increase."

The U.N. says the number of Syrian refugees seeking its help now tops 2 million and could be far higher.