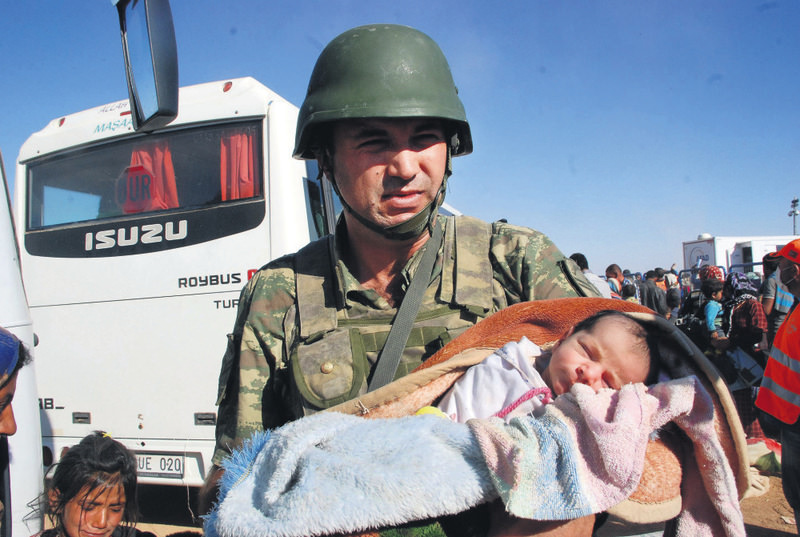 Ferman, cradled by a Turkish soldier on the border, was born in a Turkish border town her mother took shelter in minutes after the Syrian family which fled Kobani in Syria, arrived there last year.
by Daily Sabah Jun 22, 2015 12:00 am

More than 60,000 Syrian babies born in Turkey during the past four years suffer from statelessness. They face an uncertain future with no apparent end in sight to the conflict in Syria and their continued status as ‘guests' in Turkey

Turkey, home to nearly 2 million displaced Syrians who fled the ongoing conflict in their country, hosts more than 60,000 Syrian babies born as stateless in the country, a study revealed.

Figures in a recently published study jointly conducted by researchers from Hacettepe University and the Prime Ministry Disaster and Emergency Management Authority (AFAD) show 30,000 Syrian babies were born in 10 cities where refugee camps are located between 2011 and 2014. Over 60,000 infants are estimated to have been born in the past three years across the country.

Since Syrians are granted a temporary status as "guests," babies are regarded stateless, stripped of citizenship rights. Babies, like their parents and other Syrians, are issued a "guest card" or IDs used for registration of their status. Figures show that an average of 76 babies were born daily to Syrian mothers.

Apart from 60,000 babies, it is believed much more were born amid the large community not living in tent camps, which house over 260,000 Syrians.

Displaced Syrians often lack IDs, passports, and other documents required to prove their nationality. As they are often forced to flee at a moment's notice without their possessions, they have difficulty registering their newborn babies.

Undocumented children, with no proof of their nationality, are at risk of a lack of access to health care, education and other basic services. Turkey offers free health services for all displaced Syrians and have set up schools in tent camps to provide education to Syrian children.

Being stateless is not the only problem babies face. Those whose parents die after giving birth to them while in Syria have no prospect of a permanent abode. Some 100 Syrian children who took shelter in Turkey with the aid of fellow Syrians are accommodated at shelters for orphans by Turkish social services. Older children between the ages of 13 and 18, who lost their immediate family and relatives in the conflict, are cared for in facilities set up at several tent camps along the Turkish border.

According to UNICEF figures, 54 percent of all Syrians who fled into Turkey are children, a percentage roughly corresponding to 900,000 children.

Turkey began taking in thousands of war-torn Syrian refugees who fled the violence that surfaced with the civil war in 2011 and continued apace with the rise of the Islamic State of Iraq and al-Sham (ISIS) in their native land. Some 23,000 have been recently taken in after heated clashes between Kurdish forces and ISIS militants forced them from their homes.

As one of the few countries in the region that pursues an open-door policy for Syrian refugees, the country complains of shouldering the heavy burden that the large number of refugees inflicts on it. Ankara last year held a series of workshops to draft a policy to tackle the possibility of a permanent stay for Syrians. Though granting them citizenship is out of the question at the moment, work permits may be issued for Syrians who lead impoverished lives.
Last Update: Jun 22, 2015 9:56 pm
RELATED TOPICS