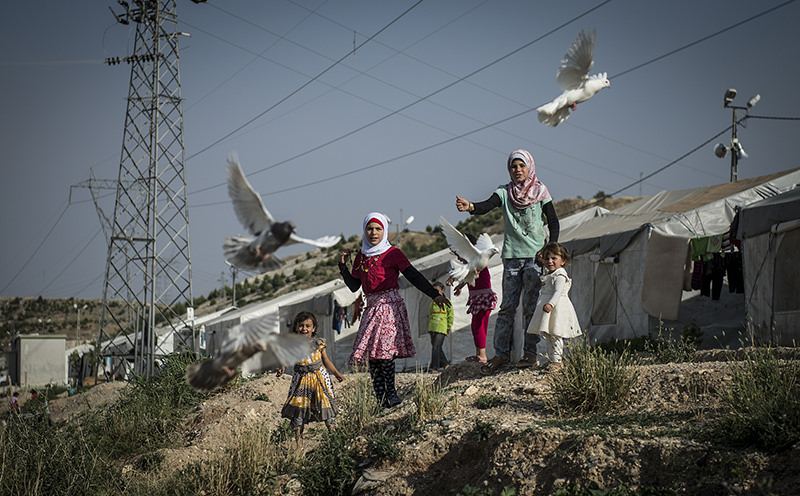 | AA Photo
by Anadolu Agency Jun 22, 2015 12:00 am
The Parliamentary Assembly of the Council of Europe (PACE) has praised Turkey for its "extreme generosity" towards refugees and urged the international community to demonstrate similar responsibility in sharing the burden of migrants.

In her speech at the PACE summer session in the northern French city of Strasbourg, PACE President Anne Brasseur recalled her visit to the refugee camps and cities in Turkey along with a delegation of 25 members of the assembly.

"I would like once again to praise the extreme generosity of Turkey and the Turkish people and the outstanding efforts of the Turkish authorities to provide for this massive flow of refugees," Brasseur said.

She called on the international community for "more solidarity and sharing of responsibility".

She recalled that Turkey was hosting about two million refugees from Iraq and Syria, with 250,000 of them living in refugee centers and many others in cities and towns. "There is a city called Kilis (near the Syrian border) which has 90,000 inhabitants and it is hosting about 110,000 refugees," she said.

Brasseur said that Turkey had so far spent $6 billion on refugees, while the international community's contribution stood at just $400 million.

"More than 50 million people were displaced by war and violence in 2014," she said, adding: "In 2015, the numbers will climb to above 60 million, [which is the size of] the population of a large European country."

She said that Europe was at the forefront of this refugee crisis and mixed migratory flow. "The Mediterranean Sea has become a 'mass grave' for thousands of people who try to cross to Europe. To this one needs to add the tragedy of refugees from Syria and Iraq, crossing the border into Turkey, not in their thousands, not in their hundreds of thousands, but in their millions," she added.
Last Update: Jun 22, 2015 7:28 pm
RELATED TOPICS